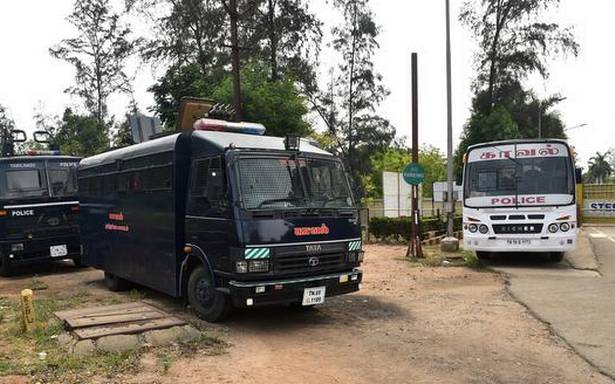 Around 600 policemen have been deployed, along with water cannons and tear-gas vehicles

The police have tightened security in Thoothukudi after the Supreme Court on Tuesday allowed mining company Vedanta’s plea for operating the oxygen plant in its Sterlite Copper smelter that remains sealed since May 2018 after protests.

Additional Director-General of Police (Law and Order) Jayant Murali is camping in Thoothukudi, along with other police officers, to monitor the security arrangements in the district, especially near the Sterlite Copper premises in the SIPCOT Industrial Complex. The Collectorate and the villages where many protesters reside are also under watch.

“Around 600 policemen have been deployed, armed with water cannons and tear-gas vehicles,” said a police officer.

Though no protest was staged by the groups that demand permanent closure of the copper smelter, the police are monitoring them. “We’re in touch with all the movements that supported the anti-Sterlite agitation in the past. We’ll take a call on the Supreme Court’s order very soon,” said an office-bearer of a protest group.

Meanwhile, Vedanta, promoter of Sterlite Copper, has thanked the Supreme Court, the State and Central governments and civil society for supporting its request for running its oxygen plant “to meet the nation’s urgent needs”.

“We have put together a plan for achieving a safe, sustainable roadmap to activating our oxygen manufacturing facilities. We will extend our full cooperation to the oversight committee that will be set up under the guidance of the Hon’ble Supreme Court. We are focussed on swiftly meeting the critical need for oxygen in keeping with all necessary precautions and urgency. We are committed to making the entire production capacity available only for the purpose of producing medical-grade oxygen and are already working with experts on how best to resolve the logistics of dispatching it to critical areas… All our efforts are now directed towards reactivating the oxygen plant at the earliest, with the support of our communities and employees,” the company said in a statement.