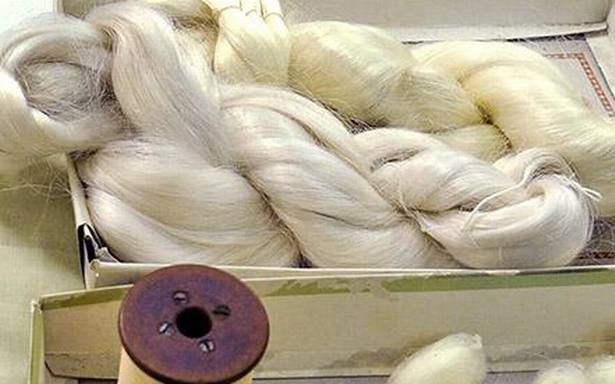 Karnataka Silk Marketing Board unit to be made operational in Varanasi

Karnataka is expected to meet the requirement of raw silk for weavers of Banarasi silk saris in Uttar Pradesh by making the Karnataka Silk Marketing Board (KSMB) unit operational in Varanasi by the end of December.

Minister for Sericulture and Youth Empowerment K.C. Narayana Gowda, who led a delegation of Sericulture Department officials to Varanasi recently, revealed that the Uttar Pradesh Government had responded positively to the State Government’s proposal to set up the KSMB unit.

The U.P. Government had provided space at Sarang Talab in Varanasi for the unit. Soon, a Memorandum of Understanding (MoU) would be signed between the U.P. Government, the National Handloom Development Corporation (NHDC), and the Karnataka Government, which will clear the decks for starting work, he said.

Mr. Gowda and the delegation held discussions with representatives of U.P.’s Sericulture Department and reelers and weavers at Banaras Hindu University on November 18, said a statement.

The weaving industry of Varanasi is the source of livelihood to an estimated 18,189 families, But, the State produces only 258 tonnes of raw silk every year against a total requirement of 3,000 tonnes.

Also, mulberry, source of feed for silkworm, is cultivated only on 7,984 acres of land, the statement said, before adding that the weavers of Varanasi were heavily dependent on silk from outside.

Officials from Karnataka explained to their counterparts about the technology used for silk production, including facilities extended to sericulture farmers, reelers, use of byproducts, and the marketing system.

During his stay in Uttar Pradesh, Mr. Gowda also visited Allapur town, famous for the Banarasi saris, and held discussions with the weavers.

Informing them about the proposed setting up of KSMB unit in Varanasi, he urged them to purchase the superior silk from Karnataka.