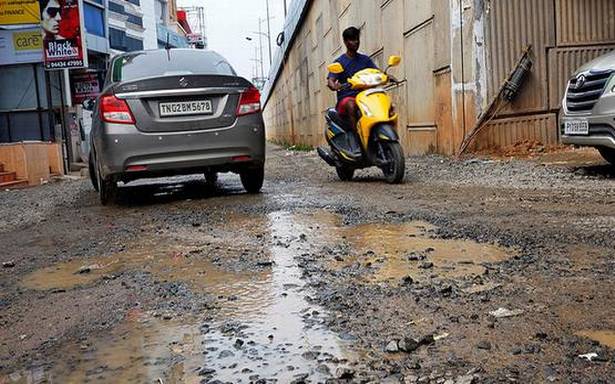 Lack of proper road, waterlogging in the absence of proper drainage, frequent power outages and garbage dumping have become a major worry for a section of residents and owners of around 150 shops on the two sides of the service lanes below the flyover on 100 Feet Road.

Even months after opening of the first flyover in the Union Territory on 100 Feet Road, no proper service road has been laid, causing enormous hardship to people. The 1.2-km bridge sanctioned by the Ministry of Road Transport and Highways was completed two years ago and opened for traffic recently. The plan was to provide service roads with 5 m wide service roads with proper drainage. “The bridge is thrown open as per the plan but nothing has been done to construct the service roads. No proper drainage facility has been provided so far. The entire road is full of potholes and filled with sewage,” said Vijaya Kumar, general manager of Rooster Automobiles.

The recent heavy spell of rain has further damaged the road. “Since there is no proper drainage, sewage mixed with water often enters the electric junction boxes causing power disruptions. On every alternate day, the power goes for a few hours, making the owners of shops depend on diesel-powered generators,” he said.

R. Thankamani, a resident, said people find it difficult to travel during night because of the potholes. Two-wheelers skid because of the patchy surface, Mr. Vijaya Kumar added.

An employee of a two-wheeler sales outlet said customers find it difficult to reach the shops on the service road. Several people have complained about the condition of the roads, he added.

Another major problem, according to Mr. Thankamani, is the dumping of garbage near the railway gate. People indiscriminately dump the waste, and civic authorities take days to clear it. “Apart from lack of civic amenities, the space below the bridge along the service roads has become a safe haven for anti-social elements. Under the cover of darkness, they party, creating public nuisance. The police should increase patrolling during night hours in these areas,” another resident said.