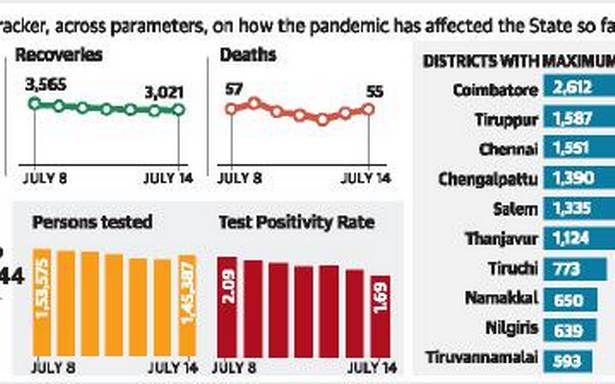 Of the fresh cases, Coimbatore recorded 270, followed by Erode with 175 and Thanjavur with 171. There were 164 cases in Salem. Chennai’s daily count fell to 153, while Tiruppur recorded 146 cases and Chengalpattu 131.

Of the 55 fatalities, Coimbatore accounted for eight, while there were five deaths each in Chennai and Thanjavur. Of the deceased, 35 had co-morbidities.

Among the deceased was a 34-year-old man from Perambalur, who was admitted to a private hospital in Tiruchi on June 6 with complaints of fever for two days and difficulty in breathing for three. He had no co-morbidities. He died on July 11 due to COVID-19 pneumonia.

The deaths of two people at home were included in the bulletin. An 88-year-old woman from Chennai with fever tested positive for COVID-19 on May 28. She was admitted to a private hospital on May 29 and discharged on June 15. She died at home on June 17. She had diabetes, hypertension, Alzheimer’s disease and bronchial asthma.

A 70-year-old man from Chennai, who had hypertension, was admitted to a government hospital with fever and cough on April 20 and discharged on April 28. He died at home on April 30.