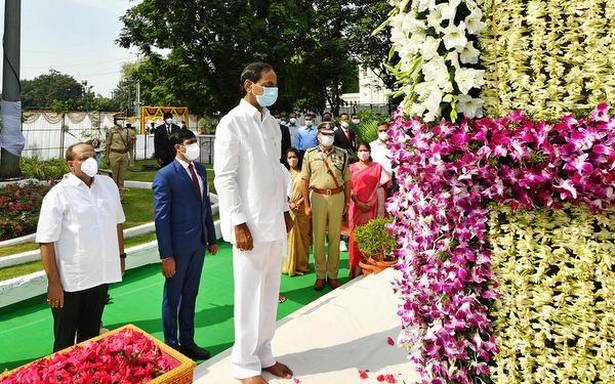 Given the COVID pandemic, the event was low key and there were no major public gatherings

Like last year, Telanagna Formation Day celebrations across the State were subdued on Wednesday due to COVID-19 pandemic.

Chief Minister K. Chandrasekhar Rao paid floral tributes to Telangana Martyrs’ column near Assembly and hoisted the flag at his camp office. While greeting people of the State, Prime Minister Narendra Modi prayed for their good health and well being. Union Home Minister Amit Shah also offered his greeting on Twitter in Telugu.

Governor Tamilisai Soundararajan returned from Puducherry where she is Lt. Governor to participate in the celebrations at Raj Bhavan. She felicitated police Commissioners Anjani Kumar (Hyderabad), Mahesh Bhagawth (Rachakonda) and V.C. Sajjanar (Cyberabad) for their outstanding services and blood donation activities during the pandemic. Incidentally, Ms. Soundararajan also celebrated her birthday on Wednesday. The Chief Minister conveyed his birthday greetings.

As announced by the government in advance, the celebrations were low key and there were no major public gatherings. The occasion was also observed in the offices of TRS, Congress, BJP and the CPI. Speaker Pocharam Srinivas Reddy hoisted the national flag at Assembly and then at Kamareddy Collectorate later. IT Minister K.T. Rama Rao hoisted the flag at the Collectorate in Sircilla. The remaining Ministers also paid tributes to martyrs memorials and hoisted flags in districts assigned to them. Chief Secretary Somesh Kumar led the administration in the celebrations by hoisting the tricolour at the BRKR Bhavan. The event was also organized at Vidyut Soudha, the electricity headquarters where TSTransco and TSGenco chairman D. Prabhakar Rao hoisted the national flag. The Principal Secretary of forest Shanti Kumari participated in the celebrations at Aranya Bhavan. The commute of the Chief Minister to the memorial near Assembly and Raj Bhavan resulted in huge traffic jam near his camp office.

In view of the COVID-19 pandemic, the celebrations were low key in the erstwhile Medak district. Finance Minister T. Harish Rao hoisted the national flag at Siddipet followed by Home Minister Mohd. Mahmood Ali at Sangareddy and Fisheries Minister T. Srinivas Yadav at Medak. Lok Sabha members K. Prabhakar Reddy, BB Patil and others have also participated in the celebrations.

Energy Minister G. Jagadish Reddy, greeting people of Suryapet on the seventh State Formation Day, said Telangana remained one of the best performers in the country. Mr. Reddy compared agriculture, irrigation and the welfare sector to pre-2014 and now, and said Telangana is already a ‘role model State’ in the country. In Nalgonda, State Legislative Council Chairman Gutha Sukender Reddy hoisted the national flag at the district Collectorate along with Collector Prashant J Patil and SP A.V. Ranganath. Alair legislator and Government Whip G. Sunitha along with District Collector Anita Ramachandran and other officials steered the low-key ceremony in Yadadri-Bhuvanagiri. Several other legislators and leaders paid their tributes to the martyrs of Telangana and garlanded the statues of Telangana Talli.