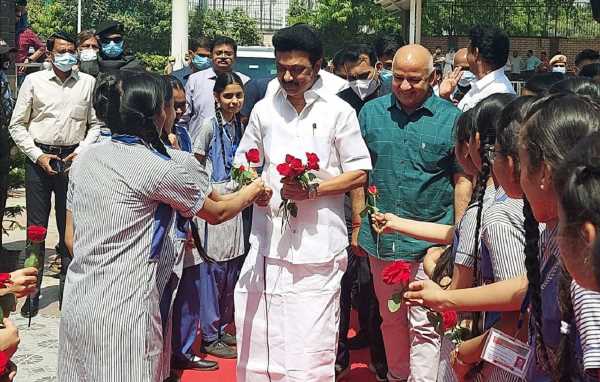 From attracting investment to being a torch-bearer of federalism to projecting himself as a national leader, Stalin has taken all the right steps, reports Shine Jacob.

Addressing a sea of the red brigade at the 23rd party congress of the Communist Party of India-Marxist in Kerala recently, Tamil Nadu Chief Minister M K Stalin scripted a history of relationship between communism and the Dravidian movement in India.

Responding to a thunderous applause by those attending the event, he explained why he attended the CPI-M event — “after all, my name is Stalin”.

To those who follow the Dravida Munnetra Kazhagam supremo, this was not just a single episode but an example of how he won hearts in his first year as chief minister, in “Stalin style”.

From attracting investment to being a torch-bearer of federalism to projecting himself as a national leader, Stalin has taken all the right steps.

“One year was a revelation for Stalin himself. He cultivated an independent image of himself, without relying on the legacy of his father or the past history of the DMK. He has been able to consolidate his position in the party. His government I don’t think has earned any ill-will in the past one year,” said Ramu Manivannan, political analyst and former head of the department of politics and public administration, University of Madras.

In Stalin’s recent UAE trip, the government grabbed investment of around Rs 6,000 crore.

The Tamil Nadu government saw an increase in foreign direct investment by 41.5 per cent during the April-December period.

“One year is too early to gauge the success of a government on the economic front. But the indications are in the right direction,” Manivannan added.

However, his critics are calling these a “publicity stunt”.

“The DMK has failed. There is no generation of employment. Several of its poll promises are yet to be fulfilled. The state’s law and order situation is deteriorating. They may have signed MoUs, but on the ground nothing is happening,” said Narayanan Thirupathy, spokesperson for the Bharatiya Janata Party in Tamil Nadu.

The DMK stalwart’s recent visit to Delhi comes as a change in tradition because he not just reached out to the Aam Aadmi Party leader and Delhi Chief Minister Arvind Kejriwal but also launched a party office in the capital.

“We do not have the infrastructure in place for industry to develop. We need agro-based industries and I believe development is still not inclusive because southern districts are not seeing any major investment,” said V Narayanan (Maalan), a political analyst and writer.

According to experts like him, Stalin is on a politically strong footing because the All India Anna Dravida Munnetra Kazhagam, the chief opponent and being a divided house, is weak.

“He wants to become a national leader but the fact is that each of the leaders whom he is in touch with has national ambitions,” Maalan added.

Creating an identity for the Tamil population should not work against the national interests, he said.

No matter what the critics say, the thumping win at the recent local body elections shows Stalin’s popularity is ascendant.