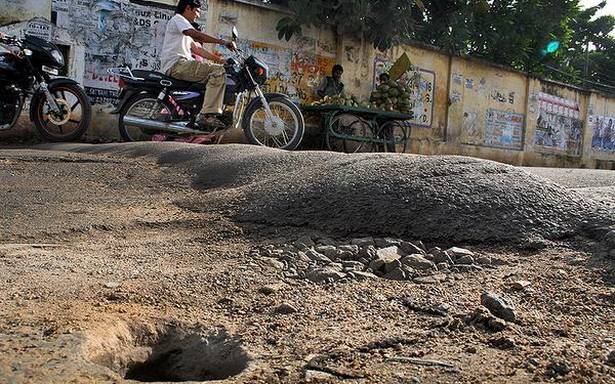 As the city expands, and encompasses more peripheries in the form of newly developing colonies, one feature that sticks out is the omnipresence of speed bumps.

Created without permission, and with no regard to the standards prescribed by the Indian Road Congress, the speed breakers end up being back breakers for many people with chronic spinal issues.

An ideal speed breaker would allow enough slope for the vehicle to be able to climb and get off without an issue. However, the illegal ones start and end abruptly, sending the suspension of the vehicles for a toss.

“Every time I travel from LB Nagar, I will have to jump over a number of speed bumps, due to which I have developed a slipped disc recently. Several accidents too happened due to their presence,” said M. Srinivas, a commuter from the FCI Colony. Social media too is full of complaints against illegal speed breakers.

“In Hyderabad, we don’t think of them as ‘roads’, but as the negative space between speed bumps,” quipped Ravikiran Rao, a Twitter user.

“Three things are growing at an alarming irrational rate in Hyderabad – traffic, speed breakers and mosquitoes,” another user posted.

“These days, every home has at least one member with disc problems. Speed breakers every four meters of road length will only worsen these issues. In order to control speeds, CC cameras should be deployed, rather than troubling ordinary people,” complained Anuradha Rao, posting pictures of speed bumps in Judges Colony, Mansurabad.

GHMC officials, however, wash off their hands saying the speed bumps are illegal and not created by the corporation.

“As per the IRC guidelines, speed breakers should be at least six feet in their spread, with gradual incline and decline. They should be painted, with sign boards on both sides indicating the presence of a bump,” said a senior Engineering official from GHMC.

Nowadays, GHMC has shifted from speed bumps to rumble strips across its various road construction projects. Rumble strips are a series of small, raised obstructions, which have a speed calming effect on the vehicles, rather than toppling them over.

Colony residents have no right to alter the roads created by GHMC.

Even where they feel the need for a speed breaker, they should seek permission first from the traffic police and then from the GHMC, he said. Illegal speed bumps are punishable under GHMC Act, as they come under defacement of public property. However, no action is taken by the authorities fearing protests and objections by colony residents and corporators.