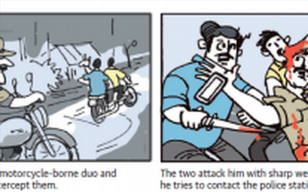 Condoling the death of the policeman, Chief Minister M.K. Stalin announced ₹1 crore as solatium to the bereaved family

A special sub-inspector of police attached to the Tiruchi rural police was murdered in the early hours of Sunday by two unidentified persons when he chased them on his motorcycle after finding them in possession of a stolen goat. C. Boominathan, 50, of the Navalpat station, was doing the night round at Poolangudi Colony on the outskirts of Tiruchi when he noticed two persons stealing a goat and leaving the spot on a two-wheeler. He chased them on his motorcycle and intercepted them at Pallathupatti near Tiruchi-Pudukottai National Highway in the Keeranur police station limits between 2.30 a.m. and 3 a.m, police sources said.

Even as he was trying to contact the police station, the unidentified persons attacked him with sharp weapons on the head, killing him on the spot, and escaped.

On information, Tiruchi Commissioner of Police G. Karthikeyan, who is the in- charge Inspector-General of Police, Central Zone, and Deputy Inspector of Police (Tiruchi Range) V. Saravana Sundar rushed to the spot and conducted inquiries.

Mr. Karthikeyan told The Hindu that four special teams had been constituted to apprehend the accused. The body of Boominathan was sent to the Mahatma Gandhi Government General Hospital for post-mortem. Later, it was laid to rest with police honours. Additional Director-General of Police (Law and Order) P. Thamarai Kannan said some clues had been obtained, and the assailants would be arrested soon. Accompanied by Mr. Karthikeyan, Mr. Saravana Sundar and Superintendent of Police (Tiruchi Rural) Sujit Kumar, he inspected the scene of crime and visited the residence of Bhoominathan at Navalpattu on the outskirts of Tiruchi.

Mr. Thamaraikannan told reporters that Bhoominathan and another policeman had chased the culprits but the latter had fallen behind.

The police have recovered a cell phone and a walkie-talkie that was carried by Boominathan from near the scene of crime. The gadgets allegedly thrown away by the accused before fleeing were recovered from a pool of water nearby, police sources said.

He also announced that one family member would be given a government job.