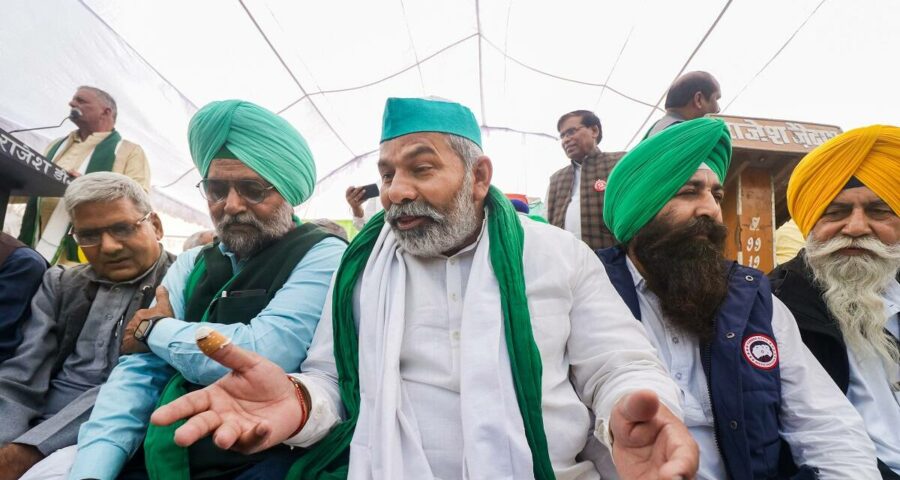 Farmers have called for the removal of Union Minister of State for Home Ajay Mishra, withdrawal of cases against farmers, and building a memorial for the protesters who lost their lives during the agitation, among other demands. Bhartiya Kisan Union (BKU) leader Rakesh Tikait on Monday accused the government of trying to divide farmers and said it should talk to them to resolve all their issues, or else “we are not going away”.

Addressing a farmers’ mahapanchayat, Tikait also asked Prime Minister Narendra Modi to give a clear answer on the demand for a law guaranteeing minimum support price (MSP) that he had “backed when he was the Gujarat chief minister”.

The PM on Friday announced his government decision to repeal the three farm laws over which the farmers have been protesting over the past year on Delhi’s borders, urging them to return to their homes.

Despite the climbdown by the government, farmer unions have said they will continue their agitation on other demands, including an MSP law and the dismissal of Union minister Ajay Mishra over violence in Lakhimpur Kheri.

“The government should talk to us, otherwise we are not going. The solution should be evolved through talks,” the BKU leader said at the public meeting called by the Samyukta Kisan Morcha (SKM), an umbrella body of farm unions.

“They did the right thing by withdrawing the laws but tried to divide farmers by saying that they failed to make some people understand the laws. We are some people,” the BKU leader said, referring to the PM’s televised speech.

Urging people to join the farmers’ movement, Tikait said, “They will entangle you all in Hindu-Muslim, Hindu-Sikh and Jinnah and will keep selling the country.”

The Jinnah reference was to a slugfest between the ruling BJP and the Samajwadi Party after its leader Akhilesh Yadav made a remark equating the founder of Pakistan with freedom fighters like Sardar Vallbhbhai Patel.

He claimed that as chief minister of Gujarat Modi was part of a committee that suggested to the then prime minister Manmohan Singh that a law guaranteeing MSP was required.

“The report of this committee is lying in the PMO. There is no new committee required nor has the country more time,” Tikait said, referring to the government offer to set up a panel.

“Give a clear answer. The prime minister will have to give a clear answer before the country whether he will accept the suggestion of the committee he was a part of for an MSP guarantee law,” he said.

He also attacked the media saying that since the past three days they have only been questioning the farmers.
“We have many issues including the one related to the farmers who lost their lives during the agitation,” he said.

Among the demands made by SKM are withdrawal of cases against farmers, building a memorial to the protesters who lost their lives during the agitation and withdrawal of the Electricity Amendment Bill.