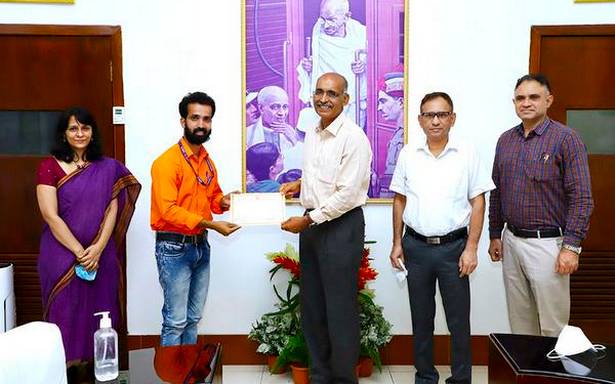 Southern Railway recently felicitated three trackmen from Mangaluru region for their exemplary service while appreciating the staff for detecting track abnormality near Kulashekara on August 25 and speedy restoration of the track.

During his night patrol duty in the Padil-Kulasekhara section at 1 a.m. on August 25, he noticed that the ER clips (Elastic Rail Clips) were in damaged condition for a length of 300 metres at Kulashekara.

He immediately exhibited the danger signal towards the approaching Train No 06098 Yog Nagari Rishikesh-Kochuveli Express Special consequent to which, the train was stopped. This ensured safety of passengers and prevented damage to valuable railway assets.

Lakshman Sirka, Track Maintainer-II, was awarded in appreciation of his devotion to duty.

Mr. Babu had in his social media post said that not many were aware that there existed a category called track maintainer. Guarding steel rails and remaining vigilant at the dead of night, track maintainers keep watch on swelling waters under bridges and watch out for tree fall or landslip on tracks, he had said. Walking 20 km along the track with heavy backpack of tools, they take a break every 5 km and struggle hard to keep away sleep, he had written. Following this, the Railways rationalised their working to some extent recently.