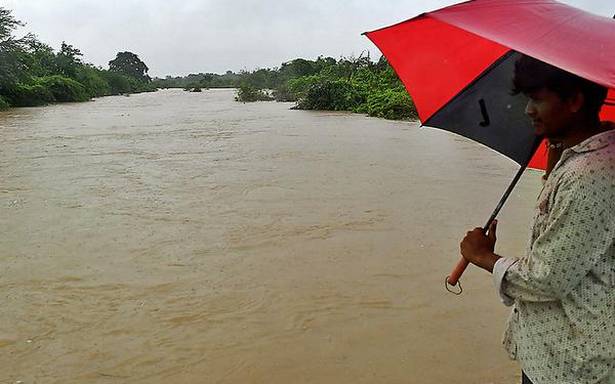 A seven-year-old girl was killed in a rain-related incident in Palvancha town and normal life was paralysed as intermittent spells of heavy rain pounded many parts of the district leading to waterlogging on roads in Kothagudem, Palvancha and elsewhere in the district on Monday.

A girl identified as Anjali of Jayamma Colony in Palvancha, while accompanying her mother and ten-year-old brother to a grocery shop near her house, accidentally fell into an overflowing drain and was swept away by a gush of storm water.

Her brother also slipped into the drain but was pulled out swiftly by a passer-by, sources said.

The panic stricken mother of Anjali along with some locals mounted an intensive search for her daughter amid heavy rain.

Their frantic search ended on a tragic note with the recovery of the body of the girl at about 1 km away along the Rathi Cheruvu lake some time later.

The heavy downpour in the wee hours of the day resulted in water stagnation at the railway under bridge in Kothagudem town bringing vehicular movement at the busy stretch of the main road to a halt.

Earlier in the day, a TSRTC bus was stuck in the waterlogged road prompting the local authorities to rush in a rescue team to pull out the bus.

The swollen Murrdeu stream flooded a low-level causeway near Palvancha cutting off the road link between several villages in Palvancha and Mulakalapalli mandals.

Traffic movement between Padamati Narasapuram and Bethalapadu remained disrupted for several hours in the early hours of the day as a small stretch of the road was inundated by swollen Tummalavagu stream, sources added.

Rain water flooded several streets and encircled houses located in low-lying areas in the district headquarters town of Kothagudem forcing people to either remain indoors or wade through knee-deep water in several localities in and around the coal town on Monday.

He asked the Revenue and Municipal officials to shift the dwellers of the rain-hit areas to relief camps.

He further directed the Irrigation Department officials to prepare an action plan to find a lasting solution to the recurring problem of waterlogging in several localities in Kothagudem municipal town limits.

Meanwhile, heavy rains battered many parts of Khammam district in the last 24 hours causing waterlogging on several roads, paddy and chilli fields in Raghunadhapalem, Wyra, Sattupalli and various other mandals.