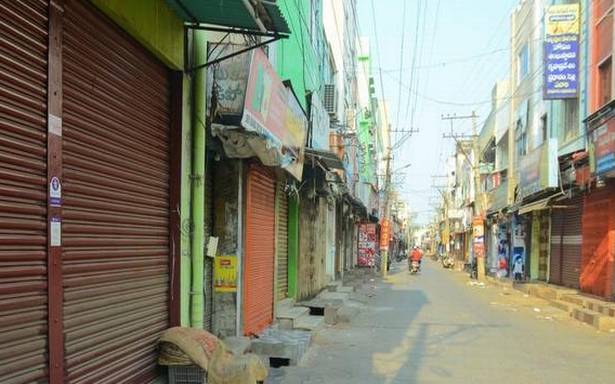 Soaring infections in the region increases rush at vaccination centres

There was no relief for people from coronavirus in South Coastal Andhra Pradesh as 12 more patients succumbed to the disease which continued to spread thick and fast in the region on Wednesday.

The number of active cases rapidly rose to a high of 17,345 as 2,605 persons contracted the infection in the last 24 hours ending 9 a.m. on Wednesday, according to a health bulletin released by the State government.

The usually-busy Bapuji market complex and Gandhi road in Ongole wore a deserted look as shops and other business establishments downed the shutters at 2 p.m. Parks and play grounds were closed down to prevent further spread.

The number of new cases was higher by a whopping 2,100 in a single day as only 444 patients, including 166 in Prakasam district, recovered in the region in the past 24 hours. The recovery rate, which was about 99% last month, dipped to 88.8% on Wednesday.

Long queues were seen in several session sites in the region as people thronged there to take the jab.

Over 8,000 persons took the jab at the 94 session sites in Prakasam till late on Wednesday, according to reports received from session sites by the health officials here. People who visited 30 session sites in Prakasam returned disappointed following exhaustion of vaccine stocks. So far, 4.17 lakh doses of vaccine had been administered to the people, Prakasam District Medical and Health Officer P. Ratnavalli said. As many as 3.33 lakh people had taken the first dose and over 83,000 people had taken two doses of vaccine in the district so far, she said.

In a nice gesture, Ongole MP Magunta Srinivasulu Reddy came forward to arrange for 14 oxygen cylinders from Chennai to the Government General Hospital every day for the benefit of patients suffering acute respiratory distress syndrome.

Overseeing the health condition of patients at the GGH in Ongole, COVID-19 nodal officer John Richardson said there was no shortage of beds though a large number of fresh cases requiring critical care poured in every day. The hospital had enough stock of medicines including Remdesivir to treat serious patients, he added.