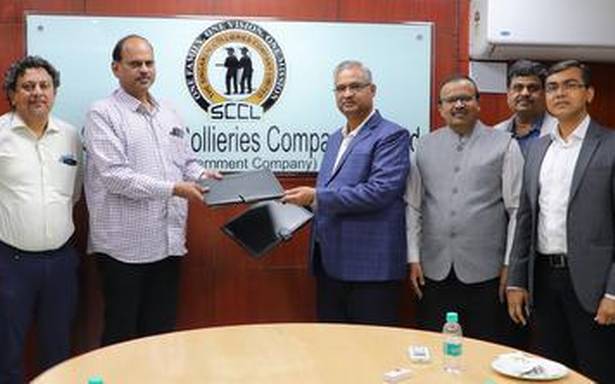 Agreement signed for supply of 25.4 lakh tonnes a year

Singareni Collieries Company Limited (SCCL) has entered into an agreement with NTPC Ltd for supply of about 25.4 lakh tonnes coal every year to the first unit of its super thermal power plant at Solapur in Maharashtra. The fuel supply agreement was signed here recently by the officials of the two public sector entities.

According to officials of SCCL, the Solapur thermal plant of NTPC has been getting coal supplies from Coal India Ltd so far, but the major public sector energy producer decided to switch over to Singareni for fuel needs of the plant. The long-term agreement signed would be in force for 25 years.

Earlier, the NTPC had moved the Ministry of Coal for change of fuel suppliers from Coal India to SCCL on the grounds of quality, uninterrupted supplies and transportation costs. The Ministry had given its nod recently as it was convinced that taking coal from Singareni would be more economical and viable for the Solapur plant.

The SCCL officials said they have already been supplying 135.3 lakh tonnes of coal every year to NTPC power plants in eight States including in Telangana, Andhra Pradesh, Maharashtra, Karnataka, Chhattisgarh, Odisha, Madhya Pradesh and Uttar Pradesh.

Meanwhile, Managing Director of Karnataka Power Corporation Ltd (KPCL) V. Ponnuraj, who is also holding the additional charge as Secretary (Energy) of Karnataka, had a meeting with Director (Finance and Projects) of SCCL N. Balaram here on Monday and complimented the coal company for its seamless supply of coal to Raichur (1,470 mw), Yeramarus (1,600 mw) and Bellary (1,700 mw) power plants.