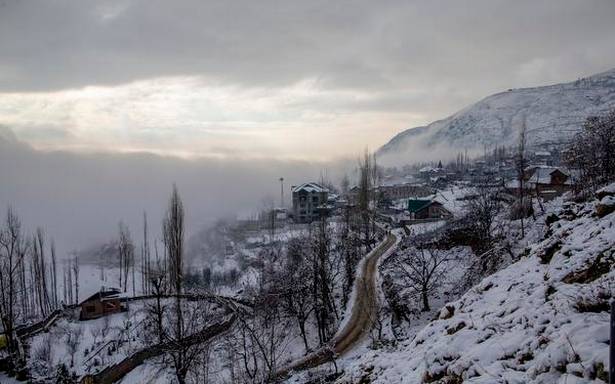 A fresh spell of snowfall disrupted air traffic and left tourists stranded in the Kashmir valley on Tuesday as the weather department issued an “orange alert” and predicted “intensification of wet weather” over the next 24 hours in Jammu & Kashmir.

Snowfall started on Monday night and continued till late on Tuesday afternoon. An official spokesperson said the continuous snowfall and poor visibility resulted in the cancellation of 42 flights across all airlines on Tuesday. “Flights were operating as visibility improved [by late afternoon],” the official said.

The cancellations left scores of tourists stranded in the Kashmir valley. The Directorate of Tourism has established an emergency helpline service for tourists.

Former Chief Minister and National Conference (NC) vice president Omar Abdullah criticised the airport authorities for the flight cancellations. “Our ‘international airport’ has no landing aids that enable the runway to remain open when visibility dips. We make such a big deal about tourism and investment promotion, now imagine the plight of those tourists who’ve sat all day outside the terminal and watched their flights get cancelled,” Mr. Abdullah said.

Traffic remained unaffected on the Srinagar-Jammu highway, which connects the Kashmir valley with the rest of the country. However, many other important routes, including the roads connecting Shopian-Poonch, Kokernag-Kishtwar, Bandipora-Gurez and Srinagar-Leh remained closed due to inclement weather.

“There are chances of snow avalanches and landslides in vulnerable areas, disruption of power supply in hilly areas and water logging in low lying areas, besides further dip in day temperatures,” the India Meteorological Department said.

In view of the impending bad weather, the IMD urged people not to venture out in avalanche and landslide-prone areas. Sonam Lotus, Director, IMD, Srinagar, said the weather will most likely improve from January 9.