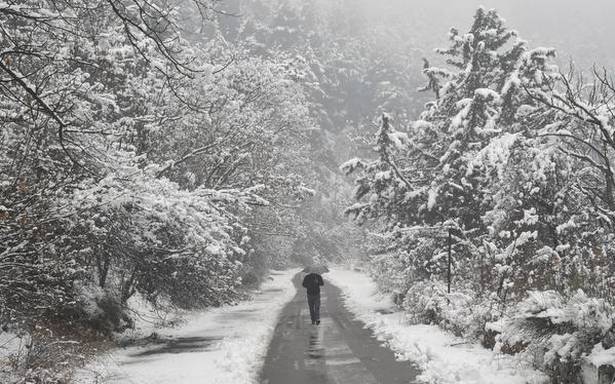 A heavy spell of snowfall hit the surface and air traffic in Kashmir on Sunday. The closure of roads had left scores of aspirants and students, appearing in examinations, stranded.

The snowfall started early in the morning in the plains of the Valley and forced closure of the Srinagar-Jammu, -Poonch and -Kargil highways. Air traffic was also suspended due to poor visibility, officials said.

Aspirants appearing for the banking examination in the J&K Bank demanded re-examination for the stranded and for those who failed to reach the venues in time due to slippery roads. “The examination venue was out of bounds for many aspirants in Anantnag,” Nazir Ahmad, an aspirant, said.

All the Kashmir University undergraduate examinations scheduled on January 4 have been postponed, a varsity official said.

The snowfall has resulted in power outages and left many villages cut off from the district headquarters. A pregnant woman was ferried on a cot in north Kashmir’s Doniwari in Rafiabad after the ambulance failed to reach the cut off village. “Both the mother and child are safe,” an official said.

Srinagar Mayor Junaid Azim Mattu directed the authorities to speed up clearing the roads leading to essential services in the capital. All the districts in the valley have set up control rooms to meet any eventuality, besides helplines of the J&K police.

National Conference (NC) general secretary Ali Muhammad Sagar accused the administration of “being caught napping”. “The snowfall has debunked the claims of the administration on ensuring basic facilities to people. Pesky power supply and shortage of edibles and other household merchandise have added to the mounting woes of the people across Kashmir,” he said.

The meteorological department forecast “widespread snowfall” on Monday too.

“Moderate to heavy snowfall or rain is likely to continue till January 6. We expect heavy to very heavy snowfall mainly on January 4 and 5,” an official said.