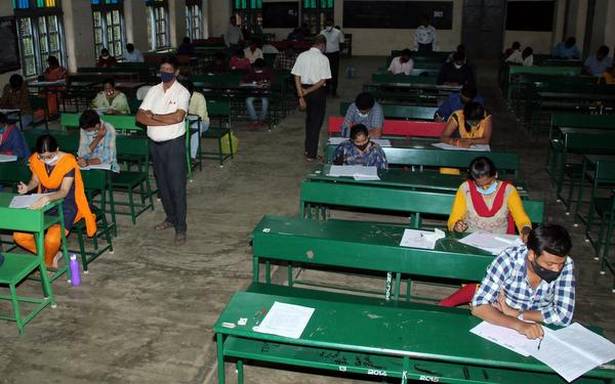 Bad road leads to some reaching an exam centre late

Out of the total 15,361 candidates who had registered for the examination in the district, 8,191 candidates took it in 51 centres from 10 a.m. to 1 p.m. An official from the district administration said all centres were completely disinfected before conducting the exam. Hand sanitisers were provided at the entrance of the centres and all candidates were compulsorily asked to wear face masks.

But there were some tense moments at S.E.V Matriculation Higher Secondary School at Narayanapuram, one of the examination centres, as a few candidates were not allowed inside as they reached the centre after 9.15 a.m.

Brother of a candidate, M.R. Arun, complained that his sister, who was nine months pregnant, was not allowed to write the exam though they reached the centre at exactly 9.15 a.m. We travelled all the way from Pappapatti near Usilampatti. The New Natham Road was extremely bumpy and difficult to negotiate for the drivers of vehicles. The officials should not have selected a centre on this stretch where the elevated road work is going on. It is totally unfair that the officials did not relax the norms and permit to write the examination,” he added.