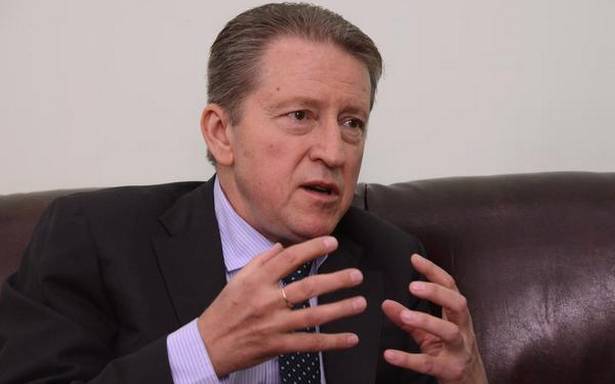 The sky is the limit for expansion of the Russia-India strategic partnership, Russian Ambassador Nikolay Kudashev said on July 14 with the two countries ramping up preparation for an annual summit as well as the first ‘2+2’ ministerial meeting.

At a media briefing, the envoy said the details of the possible visit of President Vladimir Putin to India for the summit are being discussed between the two sides.

"However, the epidemiological situation will be a very important factor," he said referring to the coronavirus crisis.

Referring to the cooperation in combating the coronavirus crisis, the Russian envoy said that the launch of the ‘Sputnik Light’ vaccine in India is expected soon.

The India and Russia annual summit was postponed last year because of the COVID-19 pandemic.

Both the countries have a mechanism under which India’s Prime Minister and the Russian President hold a summit meeting annually to review the entire gamut of ties. So far, 20 annual summit meetings have taken place alternatively in India and Russia.

He also talked about coordination between the two countries at the U.N. Security Council as well as the convergence of views on the situation in Afghanistan.

"Overall, the two sides once again reiterated absolutely shared approach to continue extending the Russian-Indian multidimensional strategic partnership bilaterally and multilaterally, for which sky is the limit," Mr. Kudashev said.

The Russian envoy said that Mr. Jaishankar’s visit was a timely follow-up of the Russian Foreign Minister Sergey Lavrov’s visit to India on April 6.

He said the visits demonstrated how much attention both sides were paying to satisfy the common desire to maintain strong dynamics of bilateral high-level contacts.

Talking about the "big events" planned for later this year, he said these include meetings of intergovernmental commissions on trade and economy as well as defence.

"The first 2+2 ministerial meeting and, of course, the summit — undoubtedly, it will be a new huge cornerstone of the special and privileged strategic partnership, which is really unique," Mr. Kudashev said.

He also referred to the BRICS (Brazil, Russia, India, China, and South Africa) summit under the Indian presidency as well as the Shanghai Cooperation Organisation (SCO) summit in September.

"We are very successful in supporting the international efforts to fight against COVID-19. It’s a matter of pride that Sputnik V vaccine being part of the Indian vaccination campaign is gradually increasing its partnerships here," Mr. Kudashev said.

He said the launch of the ‘Sputnik Light’ vaccine in India is also expected soon.

"We are committed to continuing the discussion on mutual recognition of vaccination certificates," he added.

Mr. Kudashev said a lot of attention was paid to promote further coordination in the U.N. Security Council which India will be chairing in August.

"We welcome the Indian desire to increase its involvement in the Arctic Council under the current Russian presidency. We are looking forward to the next RIC ministerial to be held by India," he said.

Talking about the situation in Afghanistan, Mr. Kudashev said both India and Russia are supportive of intra-Afghan talks based on commitments of the parties to ensure that the future government will be inclusive.

"It’s critically important to support Afghans in making their country independent, sovereign, united and democratic. After the Western troops started their speedy withdrawal, regional efforts are becoming even more important," he said.

"As you know, these days Tajikistan is holding the SCO ministerial as well ministers-level SCO-Afghanistan Contact Group meetings. The international connectivity conference is taking place in Uzbekistan," he added.

The envoy said these events represent very useful opportunities to discuss the situation.

"For sure, we will also maintain very close consultations in these and other formats as well as bilaterally in order to find ways on how we could react on the current and future developments, which are causing an increasing concern," he said.

Afghanistan witnessed a series of terror attacks in the last few weeks as the U.S. looked to complete the withdrawal of its forces from Afghanistan by August-end, ending a nearly two-decade of its military presence in the war-ravaged country.

The volatile situation in Afghanistan has triggered global concerns.