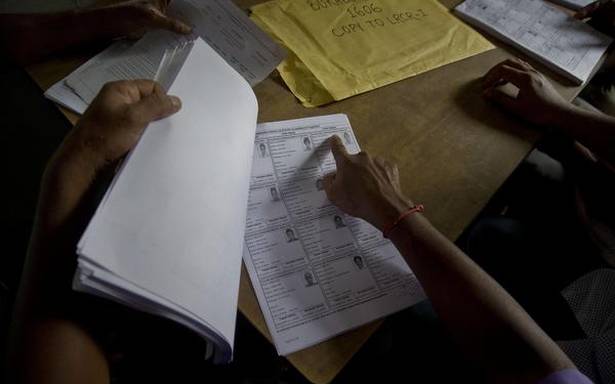 Migrants belonging to the six non-Muslim minority communities from Afghanistan, Pakistan and Bangladesh, while applying for long-term visas (LTVs), can also produce National Population Register (NPR) enrollment slips as proof of duration of their stay in India, according to a Union Home Ministry manual.

The NPR number is part of an illustrative list of more than ten documents that could be provided to apply for an LTV, which is a precursor to acquiring Indian citizenship either by naturalisation or registration under Section 5 and 6 of the Citizenship Act, 1955 for the six communities — Hindus, Sikhs, Jains, Parsis, Christians and Buddhists — from the three countries. The special provision of LTVs for Hindus and Sikhs from Pakistan and Afghanistan was first made in 2011.

The NPR was first compiled in 2010 simultaneously with the decadal Census exercise and later updated in 2015. It already has a database of 119 crore residents. The NPR is a register of usual residents linked with location particulars down to the village level and is updated periodically “to incorporate the changes due to birth, death and migration”.

The Citizenship Rules framed in 2003 says that NPR is the first step towards compilation of National Register of Indian Citizens (NRIC) or NRC.

The next phase of the NPR, expected to include contentious questions on date and place of birth of father and mother, last place of residence and mother tongue was to be simultaneously updated with the 2021 House Listing and Housing Census that has been indefinitely postponed due to COVID-19.

According to detailed guidelines issued by the Home Ministry on documents that can be produced to prove the date of entry of the minority community migrants currently in India, the “slip issued by the Census enumerators” while conducting survey for preparation of the NPR prior to December 31, 2014 can be provided.

The migrants who can apply for LTVs will have to produce any document issued by the governments of Afghanistan, Bangladesh and Pakistan “clearly showing the religion of the applicant like school certificate etc. to establish that the applicant is from a minority community,” the guidelines said.

As reported, the Home Ministry has been sensitising the States of the relevant provisions under the Citizenship Act, 1955 that could help the six communities who entered India on legal documents before 2014 and are here on LTVs, expedite their citizenship applications. The Ministry officials assert that this particular awareness drive is not related to the Citizenship Amendment Act, 2019 (CAA) that is intended to benefit undocumented (illegal migrants) from the six communities who entered India before the 2014 cut-off date. CAA is yet to implemented.

A 29-year-old Pakistani Hindu, who came to India on a pilgrim visa with his parents and four siblings in 2016, says he applied for long term-visa as he has no intention to return.

The Hindu Explains | What connects the NPR, NRIC and Census?

“We used to live in Sindh’s Amarkot; there is no administration there, we were routinely persecuted on religious lines. We are here on LTVs that are renewed every two years but we will be eligible for citizenship only in 2022 (per Section 6 of Citizenship Act, 1955),” he said on condition of anonymity as their activities are watched by the police and central security agencies and any adverse activity could impact their citizenship prospect.

The migrant, who now lives in Rajasthan’s Barmer, said that due to the ongoing lockdown they were facing hardships as they cannot take up casual jobs with markets being shut. “I recently lost my father due to COVID-19. We could not provide him better healthcare facility as we could not afford a private hospital and being migrants we are not covered under government healthcare insurance scheme,” he said.

On May 28, the Home Ministry empowered 13 more district collectors in five States — Gujarat Chhattisgarh, Rajasthan, Haryana and Punjab to grant citizenship certificates to applicants belonging to the six communities. Earlier in 2016, 16 district collectors were granted such powers that was extended in 2018.