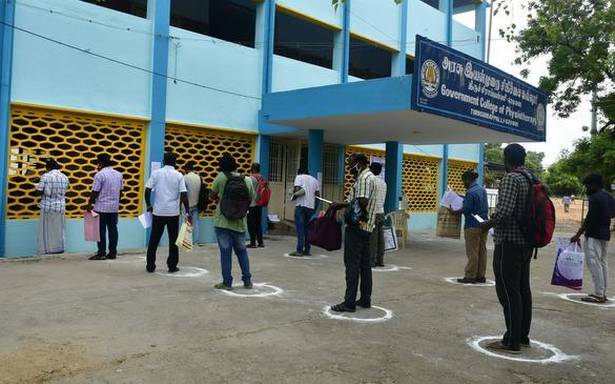 ‘Number of oxygen supported beds to be increased in Government Hospitals’

Stating that the State government was talking all steps to increase the number of oxygen beds to meet the rising requirement, Collector S. Divyadharshini on Monday said that there was no need for panic.

Ms. Divyadharshini said that a ‘unified war room’ had been set up at the Collector’s Office to monitor the bed and oxygen requirement. She observed that a section of patients, who had shown mild decrease in oxygen level, had been making frantic efforts to move to other hospitals in search of ventilator support. “The situation is under control. There is no need for panic. We have sufficient facilities and equipment to manage the situation,” she said.

As for reports regarding sale of expired Remdesivir drugs, the Collector said that the drug control authorities had clarified that the drugs could be used up to 12 months from the date of manufacture.

Ms. Divyadharshini said that the sale of Remdesivir drugs had commenced in Tiruchi. Patients of COVID-19 could get it by producing valid documents. About 300 vials of Remdesivir would be sold to the needy patients belonging to Tiruchi, Karur, Pudukottai and the delta districts daily. Depending upon the requirement, the supply would be increased.

She said that sale of Remdesivir at government establishments would automatically stabilise the availability of the drug in the market. If any report of sale of the drugs in excess of the stipulated price arose, strict action would be taken. Black marketeers would have to face tough action, the Collector warned.