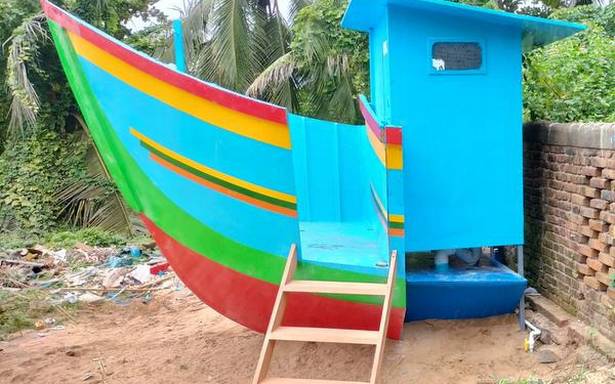 Consists of a European closet with flush tank, hand shower and wash basin plus a 500-litre biodigester

The South Indian Federation of Fishermen Societies (SIFFS) has designed a biotoilet for small fishing boats which could go a long way towards improving the on-board living conditions of the crew.

Absence of toilets on board the boats and the need for creating awareness on the issue prompted the Thiruvananthapuram-based SIFFS to design the biotoilets.

The SIFFS biotoilet, designed for a 37-foot, fibre-reinforced plastic (FRP) model boat, consists of a European closet with flush tank, hand shower and wash basin plus a 500-litre biodigester. All this is enclosed within a 4 ft x 3ft cabin. The cabin size can be further reduced if space constraints demand it, said J. Vincent Jain, Deputy Chief Executive and head, SIFFS Boatyards. The eco-friendly facility also has solar-powered lamps.

The biodigester technology enables at-source treatment of the waste matter. The bio-toilet converts septage into water and gas with the help of anaerobic bacteria. It eliminates the direct discharge of septage into the sea.

“’Right now, none of the boats is fitted with toilets. A 37-footer carries a crew of between five and seven men and stays out at sea for several days,”’ he said.

A 37-foot FRP boat costs ₹8 lakh. A basic-model biotoilet with Indian-type closet can be fitted aboard it for ₹75,000.

In a bid to popularise the concept, a prototype has been installed at the SIFFS boatyard at Veli so that fishermen, boat owners and government representatives can try it out. Earlier this week, SIFFS also organised a presentation on the concept before the Fisheries Department, Puducherry.

These biotoilets are also ideal for commercial establishments, hospitals and houseboats, according to SIFFS.