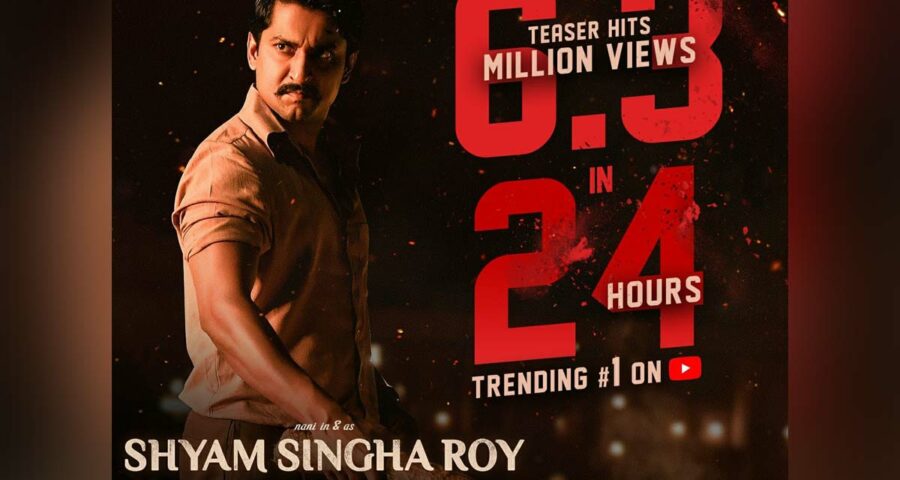 Directed  by Taxiwaala fame director Rahul Sankrityan,  Natural star  Nani starrer Shyam Singha Roy is  one of the much hyped movie of this year which is produced by Venkat Boyanapalli under the banner of Niharika Entertainments.  Recently the makers of  Shyam Singha Roy released the teaser that grabbed the attention of the many.

The  teaser packed a solid punch on YouTube. Within 24 hours of its release, the teaser of Shyam Singha Roy clocked over 6.3 million views,  and it has become the most viewed teaser within 24 hours in Nani’s career in the film industry. The teaser is  still trending at number one spot in YouTube trends. Today the makers of Shyam Singha Roy confirmed the same by sharing a poster on Twitter.

The teaser is  also grabbing headlines for the actor’s steamy kissing scene with Krithi Shetty. The Internet started to heavily trend the actor after Nani’s lip-lock scene with  Uppena girl has gone viral. All the Nani fans have been waiting for  the release of the film  ever since it was announced and now with this  teaser has left everyone awestruck.

Sai Pallavi, Madonna Sebastian and Krithi Shetty are playing the female leads. Sanu John Varghese is taking care of the  cinematography, while Mickey J Meyer is the music composer. Editing is by Naveen Nooli, whereas Avinash Kolla is handling the production design.