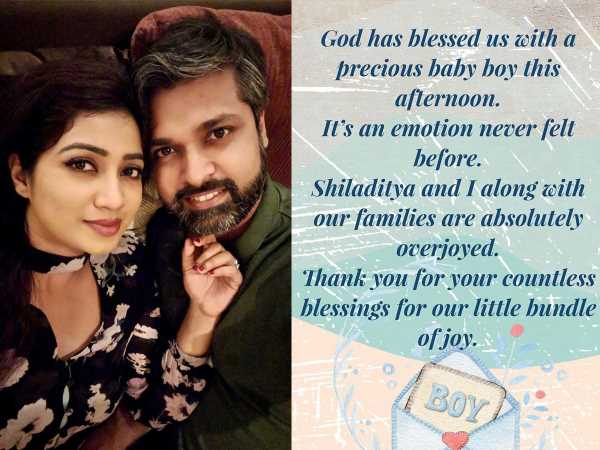 Popular singer Shreya Ghoshal welcomed a baby boy.  The singer delivered a baby boy on Saturday afternoon.  According to the latest report, both the mother and baby are healthy and doing well.

Shreya  Ghoshal herself confirmed the same by sharing a post on Twitter and said that the God had blessed her with a precious baby boy this afternoon. It was an emotion never felt before.  The singer thanked everyone by saying, “Thank you for your countless blessings for our little bundle of joy.”

The singer  had announced her pregnancy earlier this year   in the month of March with a post  and pic on microblogging page .   In the pic, she was seen flaunting her baby bump. She wrote, “Baby Shreyaditya is on its way! Need all your blessings and love as we prepare ourselves for new chapter in our lives.”

She tied the knot with Shiladitya Mukhopadhyaya in a private ceremony on 5th February, 2015  after a courtship of almost a decade.

On the work front, she released the single “Oh Sanam” in collaboration with Tony Kakkar. She is known for crooning several popular songs, including title track of 2018″s “Dhadak”,  “Ghar More Pardesiya” from the 2019 film “Kalank”,  “Deewani Mastani” from “Bajirao Mastani” in 2015, and “Bairi Piya” from “Devdas”, which marked her debut in the year  2002.