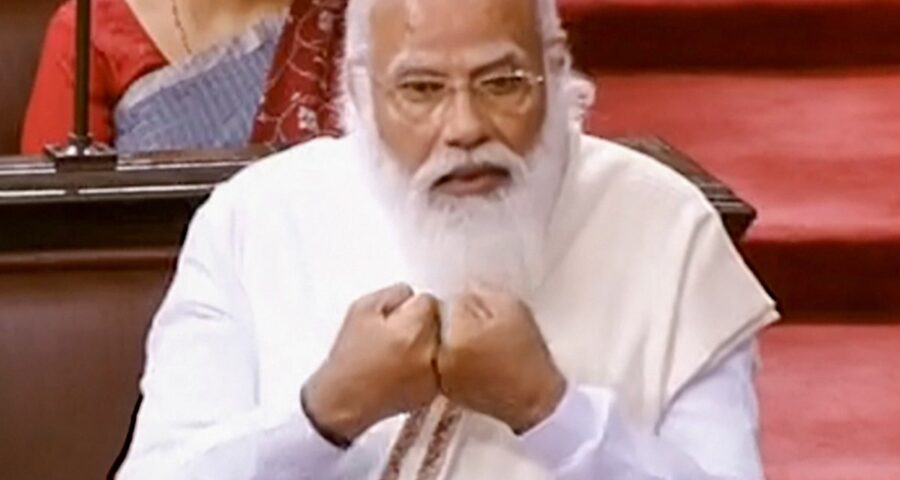 ‘I don’t believe that it behoves democracies like us who claim to be the largest democracy in the world, to have such a thin skin about the possibility of foreign commentary’

In his reply to the vote of thanks on the President’s address to Parliament on February 8, Modi did not stop there and said the protesters even have ‘Foreign Destructive Ideology’ which is harmful to India.

Clearly, the stinging reference came about in response to the international attention being drawn to the farmers’ protest outside Delhi, triggered by comments from pop star Rihanna, teenge environment activist Greta Thunberg, etc.

“If a farmers protest, without going into its merit, is allowed to linger on for more than two months in which 150 farmers or more die in the bitter cold, or march on the borders of the capital of India, it is bound to have exposure to the rest of the world,” Ambassador Pavan K Varma, retired diplomat, author and former member of Parliament, tells Rediff.com‘s Syed Firdaus Ashraf.

How do you look at Prime Minister Modi’s ‘andolan-jivi‘ remark?

The first principle of a true democracy is space for dissent, diversity of opinion, freedom of expression including the right to protest.

Therefore, to dub this (as andolan-jivi), to label those who have the democratic right to critique the government as parasites is, in my view, undemocratic.

He also referred to ‘Foreign Destructive Ideology’. Is he going the way of then prime minister Indira Gandhi who used to invoke the foreign hand trying to destabilise India whenever she felt cornered?

I believe India is capable within its democratic framework of resolving its internal differences.

However, we must accept that in today’s world, news in any one country can become news anywhere else, thanks to the power of social media and media in general, particularly television.

Therefore, I don’t believe that it behoves democracies like us who claim to be the largest democracy in the world, to have such a thin skin about the possibility of foreign commentary.

If a farmers’ protest, without going into its merit, is allowed to linger on for more than two months in which 150 farmers or more die in the bitter cold, or march on the borders of capital of India, it is bound to have exposure to the rest of the world.

There will be some who will comment on it.

Either for or against it.

Mature democracies don’t need to always react to foreign criticism by interpreting it to be an international conspiracy.

It is true that in the 1970s, after Mrs Gandhi’s spectacular victory over Pakistan and the creation of Bangladesh, perhaps she thought she was invincible and beyond democratic critique.

She used to dub any dissent as evidence of the ‘foreign hand’ or ‘CIA conspiracy’.

In those days perhaps she could be pardoned for seeing any foreign criticism as a conspiracy against India itself because social media was neither so pervasive nor did television have such a remarkable reach.

Today, to use Mrs Gandhi’s paranoia about international criticism and interpreting it as some kind of nefarious international conspiracy against India, is not only immature, but also betrays insecurity which is totally unwarranted.

Do you think the government should have refrained from reacting to Rihanna or Mia Khalifa’s tweets instead of the MEA stepping in?

In my view, the ministry of external affairs made a laughing stock of itself by taking cognisance of a pop star’s tweet.

We compounded the mistake by lodging an FIR against unknown international criminals based on Greta Thunberg’s tweet and using her tool kit as evidence of some kind of foreign conspiracy.

It does not give great deal of credit to us for reacting in this immature manner.

A lot of people appear to agree with Modi’s ‘andolan-jivi‘ remark as they think some people use protests as platform to defame the PM.

I don’t think we should reduce it to simplistic polarity of black and white.

(By that logic) the same faces perennially defend the government.

Maybe within the Opposition, there are prominent faces who exercise their democratic right of opposing the government.

I think that the very fundamentals of democracy — including incidentally the great tradition of debate, dialogue and civilised discourse of Hinduism — should allow the diversity of opinion.

Many are also disowning Lata Mangeshkar and Sachin Tendulkar and on the other hand warming up to Rihanna and Mia Khalifa. Do we disown our own Bharat Ratnas for standing by the Modi government?

I don’t think the Opposition should blindly condemn those of our well-known icons who are supportive of the government.

It is their right, nor should the government blindly condemn those who oppose them, as it is their democratic right as well.

Let us not reduce the level of discourse in our country to a point which is not only undemocratic, but is against every civilisational value which we as an ancient civilisation have considered to be of critical importance.

Modi always introduces new terms to demolish his opponents. This time he has come up with ‘andolan-jivi‘. Do you think that is what makes him such a powerful leader, as he knows how to win popularity among his supporters through the use of wordplay?

I also do not doubt his convictions or his beliefs.

But I do believe that he and his government should develop a greater tolerance to dissenting opinions and stop making a farce of the process of democratic discourse by labelling those who disagree with the government as either anti-national, traitors, unpatriotic, urban-Naxals, Maoist or Pakistanis.

Mahatma Gandhi held andolans against the British and so did Atal Bihari Vajpayee against Indira Gandhi’s government. Modi himself did andolan for the Ram Mandir in Ayodhya. How can he not be aware of all this?

The BJP as an Opposition party played its role as the leader of many andolans.

I don’t think it would have liked to be told by the ruling dispensations earlier that they were parasites then.