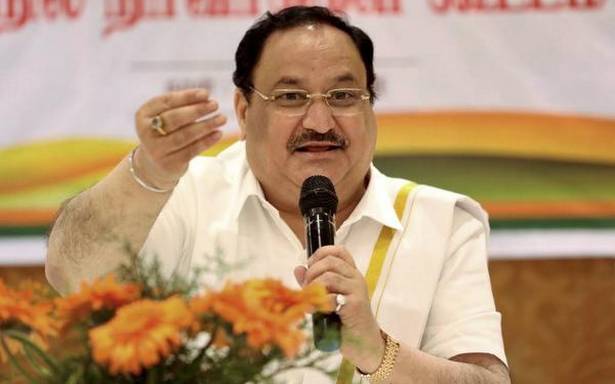 He said that those who won the elections in the name of ‘Ma, Mati, Manush’, are now engaged in “dictatorship, appeasement and strongarm tactics”.

Alleging that the Mamata Banerjee dispensation has not done anything for the welfare of the farmers and tribals in West Bengal, BJP president J.P. Nadda said on Wednesday that his party will ensure all-round advancement of the people of the State if voted to power.

He said that those who won the elections in the name of ‘Ma, Mati, Manush’, are now engaged in “dictatorship, appeasement and strongarm tactics”.

“The Mamata Banerjee government has done nothing for the welfare of farmers and the tribals,” Mr. Nadda said while attending a ‘cha chakra’ (tea session) at a village in Kalaikunda, in the West Midnapore district.

Claiming that wrongs done to the poor people of the State will not continue for long, he said “in the coming elections Mamata Banerjee has to go and the lotus will bloom”.

Maintaining that the people of the State have been deprived of the Ayushman Bharat healthcare scheme and the farmers are not getting benefits of PM-Kisan, he said that these will be made available once the BJP forms government in the State.

“On one side there is Narendra Modi who wants the advancement of Bengal and on the other is Mamata Banerjee who is trying to stop all development projects,” the BJP president alleged, addressing a large number of people who joined the tea session.

Mr. Nadda was accompanied by BJP State president Dilip Ghosh, who is also the local MP and another party MP Sukanta Majumdar.

He claimed that the lotus (BJP symbol) will ensure the blooming of the State through development, asserting that the BJP will win the upcoming Assembly elections in West Bengal.

Mr. Nadda said that the Prime Minister, during his visit to the State on Sunday, dedicated to the nation oil, gas and road projects worth more than ₹4,700 crore.

He said that ₹25,000 crore has been allotted to the State in the Union Budget for road construction and upgrade by the Modi government. “We will ensure all-round development of West Bengal,” Mr. Nadda said.