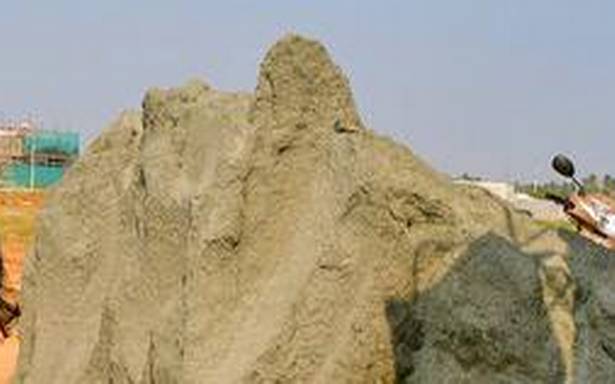 Associations blame bureaucratic hurdles in granting licence to quarries; cement price too up by 50%

Escalating cost of M-sand and shortage of material in the market has affected construction activity in the city and its fringes.

The cost of M-sand has jumped by ₹500 a tonne in the last few days and is sold at ₹1,350 a tonne. This has hit the construction sector, particularly small-time builders.

J. Jayakumar, general secretary, Tamil Nadu Progressive Consumer Centre, Pattabiram, said small-time builders were unable to take new projects as cost of most of the construction material, including cement, had increased by 40-50%.

Quality of M-sand had fallen. There must be more transparency about availability of quality material and consumers must be provided choice of buying material, be it river sand or M-sand, he said.

The delay in providing licence to stone crusher quarries was cited as a major reason for the price rise and shortage of M-sand.

The issues in obtaining transit permits for transporting the sand loads had led to the temporary shortage. Drivers were refusing to transport goods fearing harassment by officials.

“We have submitted petitions to various government agencies, including the Department of Geology and Mining, seeking action against manufacturers who sold substandard material. We have asked to accelerate process to clear pending applications for licences and withdraw transmit permit system,” he said.

The association had demanded that the rules must be simplified to help operation of the units.

Officials of the Public Works Department said that nearly 360 manufacturing units had been certified for their quality so far. The department checked only the quality of the material produced and other issues, including pricing and licence, would have to be processed by other government agencies.