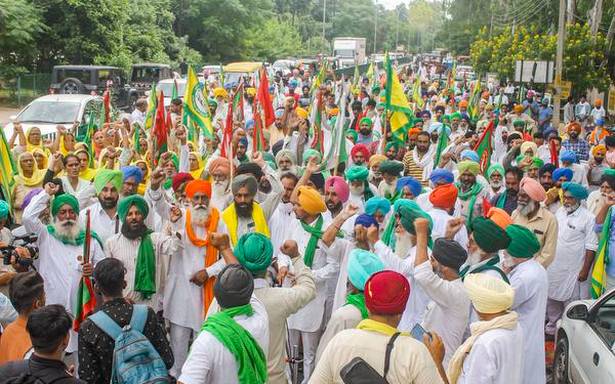 “The manner in which the farmers were attacked revealed the true face of the Central Government. I strongly condemn this incident…The farmers have every right to protest, and they were agitating peacefully in Lakhimpur Kheri. Do not abuse power in this manner just because you [BJP] hold it in your hands at this moment,” Mr. Pawar warned the BJP Governments at the Centre and in Uttar Pradesh.

Speaking in New Delhi, the NCP chief demanded that a probe be conducted by a sitting Supreme Court judge for the truth to come out. He lashed out at both the Centre and the U.P. Government for their sheer insensitivity in handling the incident.

“The Uttar Pradesh Government has created a situation similar to the Jallianwala Bagh massacre and it will have to pay its price one day…this Government cannot succeed by strangling voices of the farmers. You [BJP Governments in U.P. and the Centre] will get a fitting response not only from the farmers in Uttar Pradesh but from all over the country,” said the former Union Agriculture Minister.

The NCP chief said he had heard the U.P. Government was ready to get the incident probed by a retired judge but want the probe to be conducted by a sitting Supreme Court judge which would bring out the truth of the matter.

Remarking that the protesting farmers were not alone and that the entire country stood behind them, Mr. Pawar slammed the U.P. Government for thwarting the Opposition leaders in their attempts to visit the families of the deceased and offer them condolences.

Mr. Raut said he would be meeting Congress MP Rahul Gandhi later in the day as there was a need for a joint Opposition against the oppression of the U.P. Government.

Earlier, the Sena’s mouthpiece Saamana (whose Executive Editor is Mr. Raut), had launched a broadside against the Narendra Modi government’s conspicuous silence over the incident.

“There have been a number of occasions in the past where the Prime Minister was seen getting emotional over the issues of the poor… It is surprising that the sensitive Mr. Modi has not expressed condolences to the families of the farmers who were crushed to death,” said the editorial.