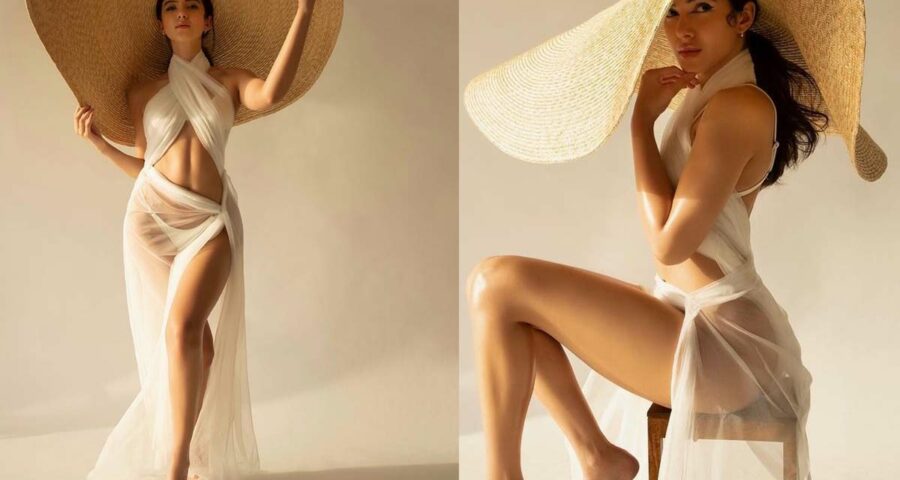 The aspiring actress  Shanaya Kapoor treated us to glimpses of a throwback photoshoot she was part of and she looks very h*t and s*xy. Shanaya Kapoor described her mood in the photographs in these words: “Mentally I am in Mexico ordering for tacos by the beach.”  Coming on the photographs,  Shanaya Kapoor  has a sheer white cloth over a white bikini. She  looks ethereal in a white bikini by the brand Ookioh styled with a sheer overlay wrapped around her body. Shanaya has  an oversized floppy hat by Myaraa by Namrata Lodha.

For the photoshoot, Shanaya Kapoor has her hair tied in a ponytail and she  has topped the look with minimal make-up, and flaunts her raw beauty.

Shanaya Kapoor  is the daughter of Sanjay Kapoor and Maheep Kapoor and she is yet to make her Bollywood debut, but  the actor’ daughter has already created a huge fan following for her.  She is popular for treating her fans and the followers by sharing snippets of her life with her friends and family.

Shanaya has also already joined Bollywood but not as an actor but as an assistant director for Netflix release Gunjan Saxena: The Kargil Girl, in which Janhvi Kapoor was seen in the lead role. She has also acted in a Netflix show Fabulous Lives Of Bollywood Wives.