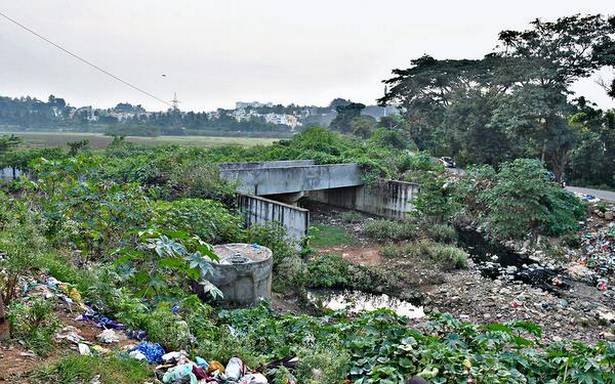 The problem is chronic in 12 developed lakes, claim civic officials

It’s not just the heavy rains that lashed the city over the past two weeks that have helped fill up many lakes, untreated sewage is also getting into many lakes. The problem is chronic in around 12 lakes that have already been developed by the Bruhat Bengaluru Mahanagara Palike (BBMP), prompting the civic body to complain against the Bangalore Water Supply and Sewerage Board (BWSSB) with the Karnataka State Pollution Control Board (KSPCB).

A senior official from the civic body’s lakes department told The Hindu that some of the lakes that had been polluted with sewage include Dodda Kudlu, Chikka Kudlu, Haraluru, Kasavanahalli, Kaikondrahalli and others in the same series.

“We have written to the KSPCB to take action against the BWSSB for not doing anything to prevent sewage from flowing into lakes. We have also sought penalty to be levied for damage caused to the waterbodies, as it costs around ₹1 lakh to purify water in one acre,” the official, who wished to remain anonymous, said.

The audit report by the Comptroller and Auditor General of India on the ‘Management of storm-water in Bengaluru Urban area’ released in September last had pointed out that rampant mixing of sewage (780 MLD) with storm-water was a serious problem.

“Sewerage lines were drawn inside the storm-water drains (SWDs) and a large quantity of sewage was illegally let into them. A joint inspection of drains confirmed the existence of sewerage lines within SWDs and sewage being discharged into the SWDs directly or through fractured manholes at many places. Since the water in SWDs is not treated in the same manner as sewage, the untreated sewage is flowing into waterbodies and affecting the quality of ground water adversely,” the audit report had noted, adding that this carries substantial risk of spurt in vector/waterborne diseases such as dengue, typhoid, cholera, hepatitis, etc., and adverse environmental outcomes including disappearance of biodiversity and aquatic ecosystems.

BBMP officials stated that BWSSB had already provided lateral drinking water and underground drainage pipelines in the newly-added areas. However, in many places, the trunk lines are yet to be laid. The lateral connections are let off downstream, which eventually flow into the drains and reach the waterbodies.

V. Ramaprasad, environmentalist and member of Friends of Lakes, claimed that practically all 210 lakes in the city are polluted with sewage. “There are manholes in the middle of Puttenahalli and Chunchaghatta lakes. Ideally, the BBMP’s SWD department should have complained to the KSPCB,” he said and hoped that this complaint does not become a case of passing the buck.

However, he also sought to know why the KSPCB had failed to take up suo motu case against the BWSSB all these years. “There have been many reports that have pointed fingers at the board. Why was no action taken so far?” he asked.

The CAG report called for high priority to be accorded to prevention of discharge of sewage into drains. The report also goes on to state that though the Karnataka Government claimed BWSSB was in the process of segregation of sewage from SWDs, no details were provided on works taken up, the action plan drawn and proposed to be drawn to prevent mixing of sewage with storm-water and the time frame within which these works would be completed.

The government had also stated (in August 2020) that many of the lakes were disconnected from the drains owing to the presence of sewage in the SWDs. The CAG had then recommended that both BBMP and BWSSB jointly prepare a plan of action to prevent sewage flow into SWDs within a definite time schedule.

Despite several attempts, there was no response from BWSSB.