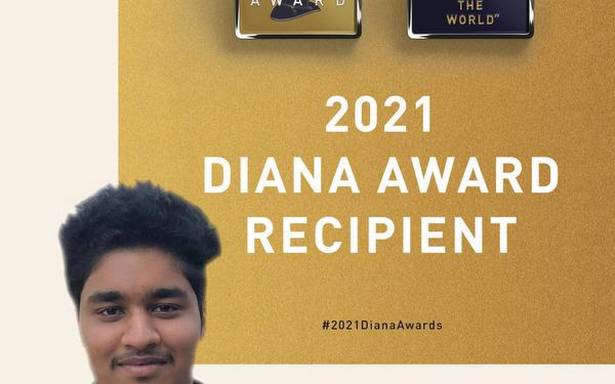 The award is in recognition of humanitarian work

Seven youngsters from Bengaluru have been conferred the Diana Award, an honour in memory of Princess Diana presented to youngsters for humanitarian work.

The recipients are Akarsh Shroff, 20, Navya Agarwal, 16, Meghana Narayan, 16, Aaryani Sahay, 16, Lakshya Subodh, 17, Sia Godika, 14, and Via Amit Thumar, 17. They are enrolled in various schools and colleges in Bengaluru.

They received the award through a virtual ceremony on June 28. Prince Harry, the Duke of Sussex, was present at the ceremony, said Mr. Shroff.

Sia Godika started a movement, ‘Sole Warriors’, to collect used shoes, refurbish and donate them to the poor.

Established in 1999, the Diana Award is considered one of the highest accolades a young person aged 9-25 years can receive for social action or humanitarian efforts.

The award is given by the Diana Award charity and is supported by the late princess’ two sons – Prince William and Prince Harry.

The winners are selected by a panel of three judges; one young person, an education or youth work professional, and a business or government representative.