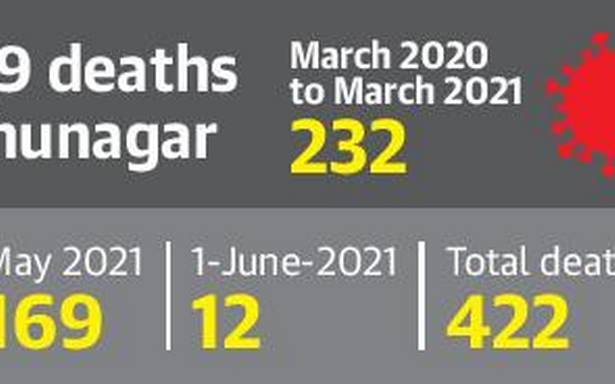 Delayed medical attention on COVID-19 patients was attributed to more deaths while doctors in some Government Hospitals say that limitation in use of oxygen was a reason for some deaths.

“Oxygen demand had increased manifold since first week of May yet the administration managed to meet the expectations despite all odds,” a government doctor said.

The major reason for high number of deaths in May was due to transparent reporting of deaths, said Minister for Revenue K.K.S.S.R. Ramachandran. “The Chief Minister M.K. Stalin has said all details about COVID should be transparent so that all deaths, including those occurring in private hospitals, were brought to light,” he added.

Besides, the people coming to the hospital after much delay resulted in increased level of infection. “People hesitated to come to hospitals and were practising self-medication without going for swab test,” he said. By the time many of them reached hospitals, they had higher level of lung problem – 50% to 60% – and their condition worsened quickly.

Another reason was that the private hospitals were pushing patients at the most critical moments to the Government Hospitals. “Doctors at GHs were not getting adequate time to stabilise patients. Many of them died within a few hours of admission,” Collector R. Kannan said. Private hospitals have been warned against taking patients with higher infection which was beyond their capacity to manage, he added.

Stating that lack of understanding about the sudden worsening of health condition, a typical condition in second wave, among the people was also contributing to the higher death rate, the Minister said.

“As more deaths were attributed to COVID, the people realised the danger and were coming forward for early detection and treatment,” he added.

A doctor said lack of high flow oxygen facility was a handicap in providing advanced treatment to the patients with deteriorated lung condition.

Virudhunagar district had oxygen tanks only in Virudhunagar Medical College Hospital (6KL) and at Government Hospital and ESI Hospital at Sivakasi.

“Only these hospitals have facilities to increase the flow of oxygen. No other taluk hospital across the State has these facilities. Since Government Rajaji Hospital, Madurai, was overflowing with patients, we were not able to send the patients there and made all-out efforts at VGMCH, (which has very limited facilities now) to save highly-infected patients and succeeded in some cases,” Mr. Kannan said .

Besides, to overcome lack of expertise in handling such cases, additional anesthetists have been deputed here.

Even as the Minister said all required facilities would be provided in GHs in the district, critically-ill COVID patients were sent to the GRH and Tirunelveli Medical College Hospital after the pressure on those hospitals have eased in recent past.

The Collector said positivity rate was gradually coming down and the number of positive cases had come down in the last few days.