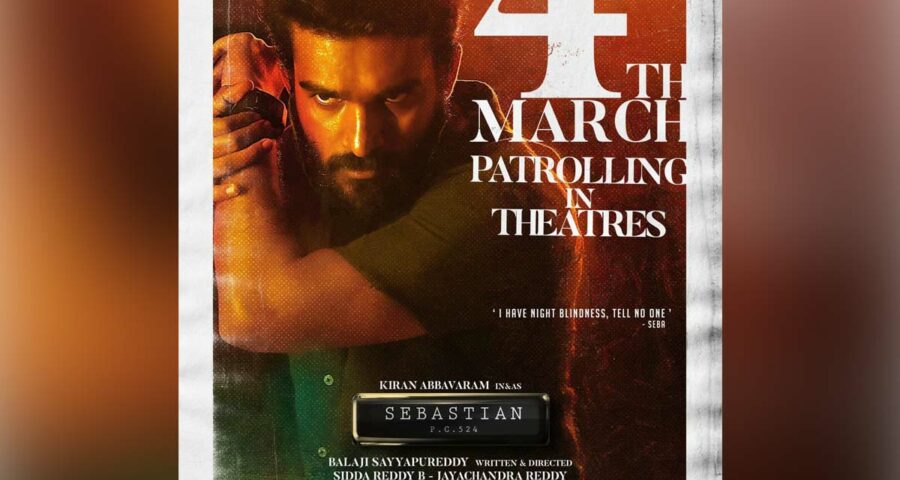 Kiran Abbavaram Sebastian PC 524  gets a new release date: Sri Kalyana Mandapam fame young actor Kiran Abbavaram is all set to entertain the  people with his next, Sebastian PC 524. The upcoming thriller was supposed to hit the theaters on 25th February but today the makers revealed that the release of the film has been postponed and now  it will arrive at the theaters on 4th March.

The reason behind the postponement is Bheemla Nayak starring Power Star Pawan Kalyan and Rana Daggubati starrer  which is releasing on 25th February. So  the makers have decided to postpone the movie Sebastian PC 524 .  Today the makers released a brand new poster to confirm the same.

In Sebastian PC 524, Kiran Abbavaram is playing the role of a cop, who suffers from night blindness. One of the posters  that was released earlier, hinted at the same, saying, “I have night blindness, tell no one — Seba.

The upcoming bilingual action drama has Namratha Darekar and Komali Prasad as the female leads.  The movie is helmed by Balaji Sayyapureddy, by Pramod and Raju, has the music of sensational composer Ghibran.  Billed to be an interesting thriller Sebastian PC 524 , will be released in Telugu and Tamil simultaneously.