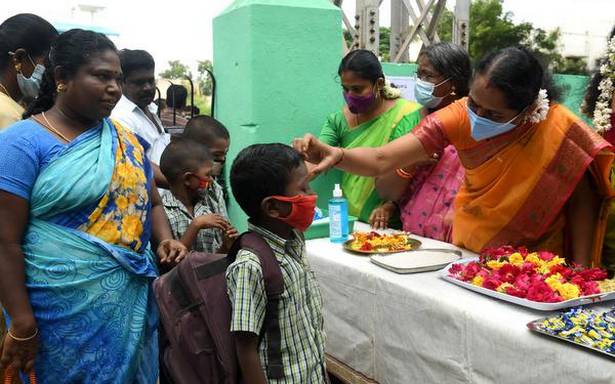 With the schools reopening for students of Classes I to VIII across the State, Commercial Taxes and Registration Minister P. Moorthy welcomed them with flowers and sweets at Thirumalpuram Middle School here on Monday.

Parents were seen dropping the children who happily went to their classrooms in the morning. There was joy all around on the campuses as the children saw their classmates after almost 18 months, when the schools had to be closed following the pandemic which broke out in March 2020.

The students would be encouraged and engaged in non-academic activities and story telling, drawing, painting and listening to music for at least a fortnight before moving into the regular stream of curricula, teachers at a government middle school said.

Collector Aneesh Sekhar said that the Standard Operating Procedure for COVID-19 precautions should be adhered to in all schools. Classrooms, corridors, restrooms and other spaces have been given a revamp in the last 10 days. The vehicles which would be used to pick up and drop the children were also screened for fitness and other safety aspects by Transport Department officials.

There was no compulsion for students to attend classes physically as the online mode was also available, School Education department officials said.

According to Chief Education Officer R. Swaminathan, there were 2,172 schools, including primary and middle schools, which had 3.46 lakh students, while 1.67 lakh students studied in classes IX to XII in the district.

A press release from Kendriya Vidyalaya-Tirupparankundram said that the teachers and the Principal accorded a rousing reception to the children. After a prayer, the children went to their respective classrooms and joined their classmates.

In Madurai Corporation, Commissioner K P Karthikeyan visited a few campuses including Maraimalai Adigalar Girls School and Singarathope Middle School. He interacted with the students and enquired about their well-being. He advised the kids to have their food regularly and wash their hands properly before taking food.

The Commissioner, in a press release said that the teaching and non-teaching staff were already given vaccine doses. Thermal scanning was used to screen the students. All precautions as per the covid19 guidelines issued by the Tamil Nadu government would be adhered to by the officials, he added.