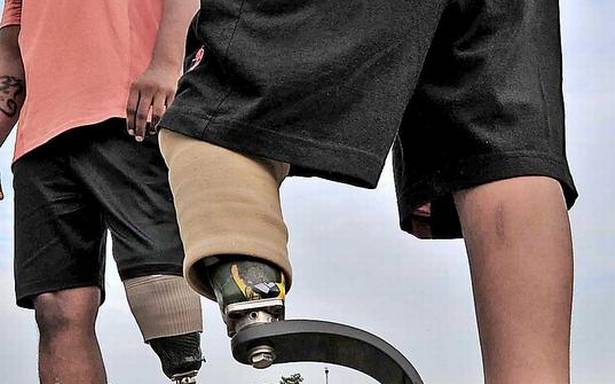 The Supreme Court has agreed to expeditiously hear a Chennai-based man’s unique plea that people like him who lost a limb in a traumatic road mishap have reduced life expectancy and should be eligible for separate, higher accident compensation.

A Bench led by Justice K.M. Joseph admitted the petition filed by V.S. Venkataramanan, represented by advocate Vipin Nair, who reminded the apex court of its own words that judiciary should not be “a neutral umpire but an active explorer and a seeker of truth” when accident victims come for relief.

The 42-year-old engineering graduate from BITS, Pilani, lost his left leg above his knee in a road accident in Chennai in 2015. He was categorised with 85% permanent physical disability. But the Madras High Court reduced the total compensation due to him from ₹84.36 lakh to ₹66.84 lakh. Mr. Venkataramanan said his medical bills, including for the amputation of his leg, had alone cost him ₹28.5 lakh. The High Court had reduced his compensation on the ground that he had lost his “future earning power”.

Mr. Nair, arguing for his client, submitted that there has hardly been any research about chances of reduced life expectancy following a traumatic amputation. He argued that the motor accident law should introduce a new category called “compensation arising out of reduced life expectancy due to amputation in motor accident afflicted claimants”. He said there were no direct judicial pronouncements by the Supreme Court or High Courts on this aspect.

“The correlation between the reduction in the lifespan of an accident claimant, who has suffered amputation and the resultant compensation to be paid under the Motor Vehicle Act, 1988 is a path not treaded by the Supreme Court in the real sense of the term. Admittedly, there is a dearth of cogent medical literature/legal precedents on this aspect under the current medical jurisprudence in India pertaining to motor accidents,” Mr. Nair argued.

The petition refers to research in the United Kingdom which “suggests that 97% of amputees suffer from concomitant conditions. Cardiovascular and cerebro-vascular diseases are particularly common”. A study by the Oxford University Press found that insulin resistance, psychological stress and patients’ deviant behaviour are prevalent in traumatic lower limb amputees.

It also placed on record a study by the Department of Psychiatry and Surgery, AIIMS, on the psychological effects of amputation. “It suggests that amputation causes psychological morbidity from 32% to 84% of the cases,” the petition said.

Mr. Venkataramanan said he knew that “money cannot renew a broken and shattered physical frame”, but it was about time law recognised and compensated for the trauma suffered by victims like him.

He referred to the Supreme Court’s past judgments which had accepted home truths like “long expectation of life is connected with earning capacity”.

Urging the court to invoke its extraordinary powers to do complete justice under Article 142, the court should come to his rescue and many like him “whose future is bleak and sheer existence, a huge struggle”.