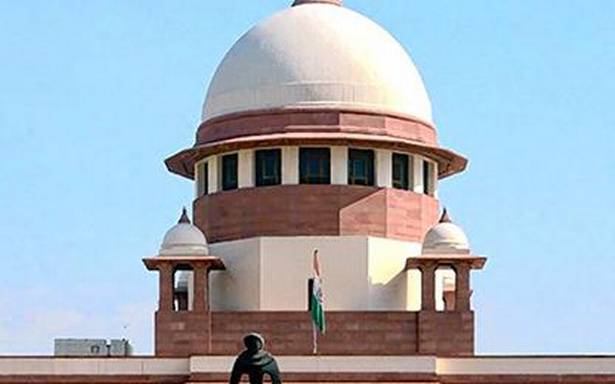 The Supreme Court has asked the Allahabad High Court to issue a fresh notification to set up special magisterial courts to try minor offences involving lawmakers and ensure allocation of cases to sessions or magisterial courts depending upon the gravity of offences, saying the non-setting up of such courts in Uttar Pradesh was “based on an evident misconstruction” of its orders.

Asking the High Court to issue a fresh circular “in conformity of the present order”, a bench headed by Chief Justice N.V. Ramana took exception to non-setting up of special magisterial courts in Uttar Pradesh for trying lawmakers in minor offences and said that the notification issued by the high court on August 16, 2019, was based on an “evident misconstruction” of its directions.

The order of the special bench, which also comprised Justices D.Y. Chandrachud and Surya Kant, came on pleas raising the legal question of whether minor offences, triable by magisterial courts, against lawmakers can be prosecuted before a special court presided over by a sessions judge who is senior to a Judicial Magistrate.

It has been alleged that such trials by sessions judges consequently lead to deprivation of one judicial forum for the right to appeal which is ordinarily available to other accused.

The apex court said the magistrate triable cases, which have been going on before the sessions court till now, will be transferred back to magisterial courts and the proceedings will commence from the stage where they were left and hence no fresh trial will take place.

“We further direct that cases triable by Magistrates which are pending before the Sessions Court in view of the Circular dated 16 August 2019 shall stand transferred to the Court of competent jurisdiction. However, the entire record and proceedings shall be transferred to the Court of the designated Magistrate and the proceedings shall commence from the stage which has been reached prior to the transfer of the proceedings, as a consequence of which the trial shall not have to commence afresh,” the order said.

The order, which came on petitions of Abdullah Azam Khan, the politician son of Samajwadi Party leader Azam Khan alleging that he has been prosecuted by special sessions court instead of a magisterial court, said that the apex court did not say that magistrate triable cases be transferred to the special sessions court.

Referring to its earlier orders, the apex court said, “The … directions do not mandate the High Courts to transfer cases which are triable by Magistrates to Sessions Courts. The directions contained in the Order dated 4 December 2018 do not supplant the jurisdictional provisions contained either in the CrPC (Code of Criminal Procedure) or in other special enactments governing the trial of offences governed by those enactments.” The directions of the apex court mandate the assigning and allocation of criminal cases involving former and sitting legislators to Sessions Courts or, as the case may be, Magisterial Courts, it said.

“This has to be in accordance with the governing provisions of the law as applicable. Consequently, where a case is triable by a Magistrate under the Penal Code, the case would have to be assigned/allocated to a Court of a Magistrate vested with jurisdiction, and the Order of this Court dated December 4, 2018, cannot be construed as a direction requiring the trial of the case by a Sessions Court,” it said.

It said the Allahabad High Court shall “ensure allocation of criminal cases involving former and sitting legislatures to as many Sessions Courts and Magisterial Courts as required, in order that cases which are triable by a Magistrate are assigned to a designated Court of a Magistrate, while cases triable by a Sessions Court are assigned to a designated Court of Sessions.” While reserving the order on Khan’s pleas, the bench had said that to solve the legal “problem” of lawmakers being tried by special sessions courts for minor offences in some states like Uttar Pradesh, it would direct high courts to set up special magisterial courts where ongoing cases would be transferred and the trials would be carried forward.

Observing that its earlier direction on setting up of special court was “misinterpreted” and “misconceived” by the Allahabad High Court which only set up special sessions court, it had said, “The sessions court cannot take the case to be tried by magistrates”.

On November 15, the apex court had said that the jurisdiction of special courts has to conform to the statutes and there would be a “very serious problem” if these courts decide this aspect.

The top court has been passing a slew of directions time-to-time for ensuring speedy investigation by the CBI and other agencies and conclusion of trials.

It had ordered the setting up of additional special courts by the high courts.

It had expressed “deep concern” over tardy probe and prosecution in CBI cases against the lawmakers and had issued directions for ensuring speedy investigation by the agency and conclusion of trials, besides setting up additional special courts by the high courts.