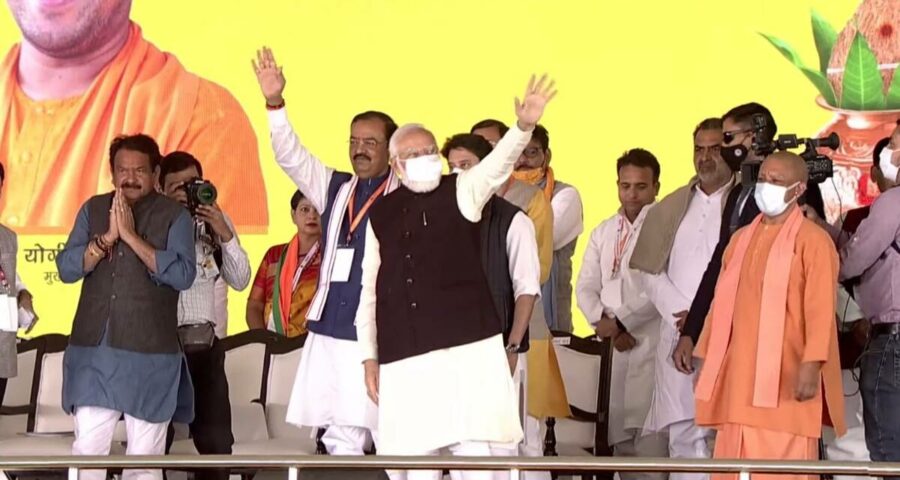 The Noida International Airport at Jewar is touted to be India's largest upon its completion. The airport will help decongest the Indira Gandhi International (IGI) airport in Delhi. Speaking at the foundation stone-laying ceremony of the Noida International Airport at Jewar, Prime Minister Narendra Modi Thursday hit out at the opposition, saying that the airport is an example of how the earlier governments in Uttar Pradesh and at the Centre ignored development of the western part of the state.

PM Modi laid the foundation stone for the Noida International Airport at Jewar. It is touted to be India’s largest airport upon its completion.

Addressing a gathering in the poll-bound state, Modi took a swipe at the previous governments saying that UP was kept in deprivation and darkness earlier but it is now getting what it always deserved and is making its mark internationally under a “double-engine” BJP rule. UP will go to polls next year.

The Prime Minister said the Noida International Airport will become the ‘logistics gateway’ of northern India and will provide new employment opportunities to thousands of people in the region. “It will benefit crores of people of Delhi-NCR and western UP,” he said. Further stating that UP has become a focal point for investments by multinational companies, the PM said the state will have five international airports.

Targeting the opposition once again, Modi some political parties in the country have always kept their self-interest paramount, “whereas, we follow the spirit of Nation First… Sabka Saath – Sabka Vikas, Sabka Vishwas – Sabka Prayas is our mantra.”

Uttar Pradesh Chief Minister Yogi Adityanath, who also joined the foundation-laying ceremony for Jewar Airport, said the state is moving on the path of development and highlighted various efforts of the government. The BJP leader also thanked the over 7,000 farmers who gave consent for the acquisition of their land for the airport without any controversy.

He also launched a veiled attack on the opposition Samajwadi Party (SP), saying that the country has to decide if the sweetness of sugarcane will grow or the followers of Pakistan founder Muhammad Ali Jinnah will cause mischief in the state.

The airport, the second international aerodrome in Delhi-National Capital Region, is expected to be operational by September 2024 with an initial capacity to handle 1.2 crore passengers per annum. The airport will help decongest the Indira Gandhi International (IGI) airport in the national capital. It is strategically located and will serve the people of cities including Delhi, Noida, Ghaziabad, Aligarh, Agra, Faridabad and neighbouring areas.

The airport is spread across an area of 5,000 acres and is being developed by Zurich International Airport AG at an estimated cost of Rs 29,560 crores. The Swiss Airport company had won the bid in November, 2019 following which a concessionaire agreement had been signed with the state government.

According to the UP government, it will be the fourth largest international airport in the world and the project would create more than one lakh job opportunities.