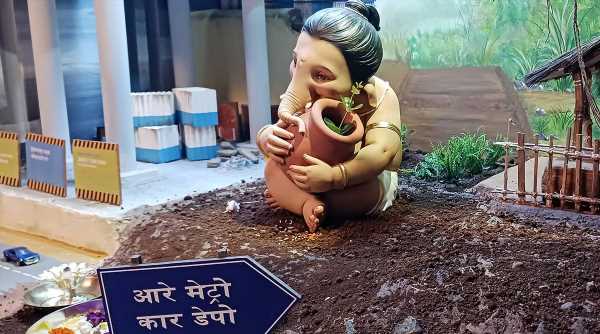 In several parts of the city, devotees have depicted Save Aarey in Ganpati pandals.

The fight for Mumbai’s green lung continues through the Ganesh Utsav festival.

Meanwhile, a group of activists staged a demonstration in Mumbai on Sunday to oppose the construction of a Metro car shed in the city’s Aarey forest and shouted slogans against the Maharashtra government’s decision to go ahead with the project, reports PTI.

The protestors carried banners with messages like ‘Save Aarey forest’ and raised slogans on the need to fight against handing over the area to builders.

Aarey, they said, is a forest comprising Adivasis and wildlife and appealed to the government to stop the destruction of the forest in the name of the Metro car shed.

Environmentalists have warned that not only leopards, but many other animals and birds face the threat of losing their habitat and lives.

The construction of a Metro car shed at Aarey, a forested land adjoining the Sanjay Gandhi National Park, was one of the first decisions reversed by the Eknath Shinde government on June 30 this year.

Last month, former chief minister Uddhav Thackeray had fervently appealed to the new government ‘not to stab Mumbai in its heart’ by going ahead with the construction of the car shed at Aarey.

After the Shiv Sena-NCP-Congress alliance came to power in 2019, then CM Uddhav Thackeray had reversed the Devendra Fadnavis government’s decision, shifting the Metro-3 car shed to a site in the Kanjurmarg eastern suburb, but it was embroiled in a legal dispute.

The Thackeray government had also declared Aarey as a reserved forest.

On August 30, the Mumbai Metro Rail Corporation Limited launched the trial run of the Colaba-Bandra-SEEPZ Metro line-3 at Sariput Nagar in the Aarey Colony.