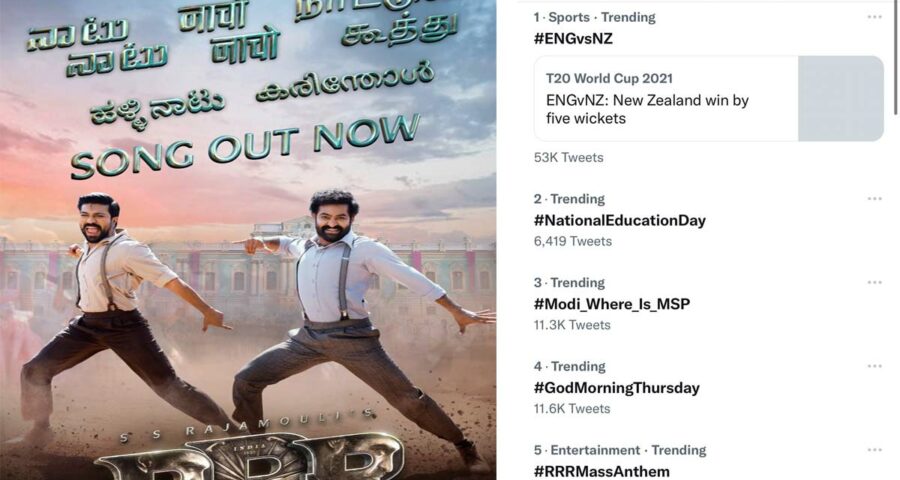 Yesterday the makers of RRR released  Mass Anthem featuring Jr NTR and Ram Charan and it set the dance mood just right with its electrifying beats. The music composed by M M Kreeavani, the song titled Naatu Naatu features Ram Charan and Jr NTR, who are playing the roles of freedom fighters Alluri Seetharamaraju and Komaram Bheem, respectively, in the film set in the 1920s, dancing like no one’s watching to the kick ass beats of it.  In this song the actors Jr NTR and Ram Charan looked like dancing dynamites. The groove moves of Tarak and Charan are choreographed by Prem Rakshith. Now according to the latest report, RRR mass anthem has been trending top 10 on twitter India since yesterday morning 9 AM.

The makers of RRR  confirmed the same by sharing a poster on twitter and said RRR mass anthem is trending top 10 on twitter India. What can be more massive than this? The love and response for it is unmatchable.

Rajamouli’ directorial venture RRR   is all about Alluri Seetharamaraju and Komaram Bheem, who fought against the British Raj and the Nizam of Hyderabad, respectively.

RRR first review out: Rajamouli screened RRR for family members and some friends