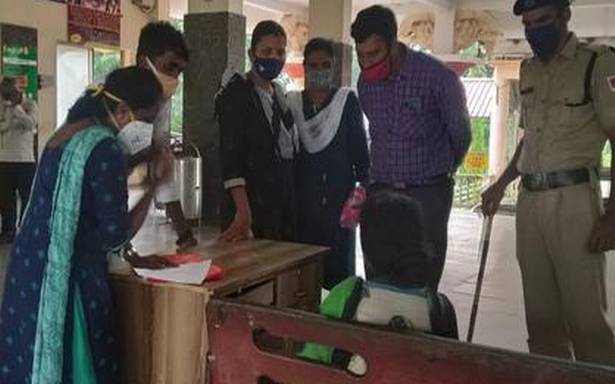 She has been handed over to the District Child Welfare Committee

Personnel from the Railway Protection Force (RPF), attached to Konkan Railway Corporation Ltd., rescued a minor girl from Madhya Pradesh and handed her over to the District Child Welfare Committee, Udupi, on Tuesday.

KRCL’s public relations manager at Mangaluru Sudha Krishnamurthy, in a communiqué, said the girl was noticed loitering inside a coach of Train No. 06084 Hazrath Nizamuddin-Thiruvananthapuram express special at around 2 p.m. She deboarded the train at Udupi and went out of the station.

However, the girl returned to the station as it was raining heavily. She did not reveal anything to the station personnel initially upon inquiry. Upon further inquiry by RPF constables and women staff from the commercial department, the girl, aged about 16, revealed her name as Priya from Madhya Pradesh. She had lost her parents and came out of the house about 10 days ago.

RPF personnel immediately informed the child welfare committee. CWC welfare officer Prabhakar Acharya arrived with his team at the station. Noticing her condition, she was taken to the government hospital for medical check-up and later admitted at the rehabilitation centre, Ms. Krishnamurthy said.