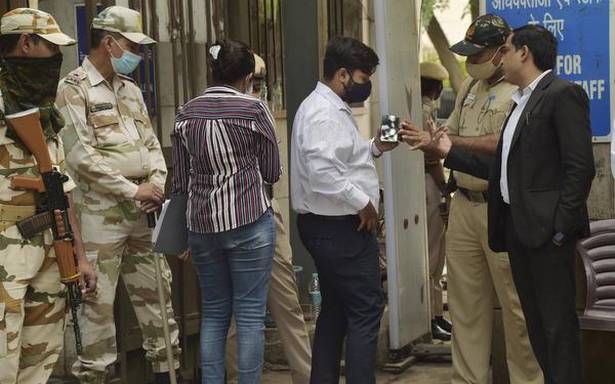 The Delhi High Court on Tuesday asked the Delhi police to submit a status report on the steps taken to ensure adequate security in district courts in the capital in the wake of recent shootout at a crowded Rohini courtroom which left three men dead.

Justice Rekha Palli said the issue of security of lawyers required urgent attention. “We don’t want to lose lives. Lawyers could also become victims of incidents like this one. We don’t want that,” Justice Palli said while posting the case for further hearing on October 11.

Also Read: Lawyers abstain from work a day after shootout at Rohini court

The High Court also asked the Bar Council of Delhi (BCD) to respond to the petition filed by advocate Deepa Joseph, who said she was severely jolted by the shocking shootout. Ms Joseph practices in the district courts here.

The police informed the High Court that it was taking steps to ensure that the security in district courts is geared up adequately.

BCD’s counsel said they had a detailed meeting with senior police officers and it was agreed that security at district courts would be upgraded to be at par with that at the Supreme Court.

Advocate Joseph, in her plea, said the shootout inside the court puts a big question mark on the safety and security of judges, lawyers and litigants inside the district courts.

The petition pointed out that last Friday’s shootout was not the first of its kind in Delhi. In the recent past there have been incidents of shooting in the Dwarka Court, a firing near the Saket Court in May 2019 and earlier in 2017, an undertrial was killed after being shot inside the Rohini Court Complex, the plea said.

In a similar line to the incident in Rohini Court was the killing of a Delhi Police head constable when four armed assailants open fired inside a courtroom at Karkardooma Court Complex in 2015, it added.

The plea also sought that the Delhi Police make the security and frisking of lawyers at par with the Supreme Court and Delhi High Court, and take disciplinary action against the officers who fail to implement this direction with utmost diligence and seriousness.