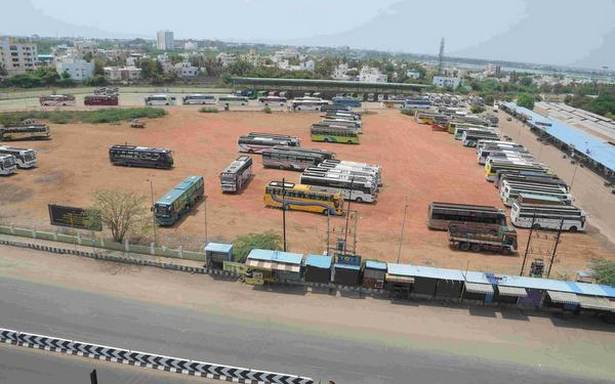 Arterial roads and public spots wore a deserted look on Sunday as the residents stayed indoors in compliance with the complete lockdown imposed by the State government.

After several months, the government imposed complete lockdown on Sundays, in the wake of rising COVID-19 positive cases in the second wave of the pandemic.

All major bus stands in the city at Mattuthavani, Arapalayam and Periyar Bus stand, remained empty. All commercial establishments, markets, and shops were closed.

But, essential services like supply of milk, distribution of newspapers, operation of ambulances, other allied medical support and vehicles carrying agricultural produce were allowed to operate during the complete lockdown.

Police personnel were deployed in all major spots and junctions to restrict the public movement. With Sunday being an auspicious day, many weddings took place in a low-key manner. The police permitted movement of vehicles for weddings only after the residents showed the invitation cards of weddings as a proof.

District Collector T. Anbalagan said that the residents largely complied with the norms and stayed indoors on Sunday.

Madurai Corporation Commissioner S. Visakan said that the local body has increased the number of tests conducted in the city. Containment measures were strictly enforced in containment streets.