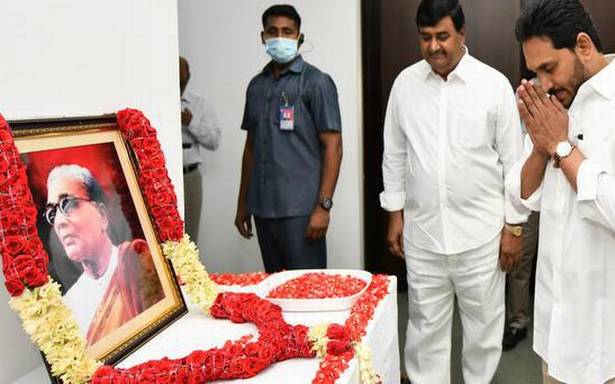 “I pay my humble tributes to Sri #TanguturiPrakasamPantulu on his 150th birth anniversary. He was a great freedom fighter, known as #AndhraKesari for his honesty & courage. He served as Chief Minister of Madras Presidency, and later became first Chief Minister of (the) new Andhra State,” Governor Biswa Bhusan Harichandan said on Twitter.

Later, in a tweet, Mr. Jagan said that Prakasam Pantulu was an embodiment of the Telugus’ courage. “Tributes to noted freedom fighter and first Chief Minister of Andhra State on his 150th birth anniversary,” he said.

In a tweet, Mr. Naidu said that Prakasam Pantulu was still remembered for his unparalleled courage and patriotism that he displayed during the independence struggle. “Andhra Kesari would always be remembered as a symbol of the Telugu people’s pride, valour and patriotism. He showed a rare fighting spirit to oppose any power however mighty that might be for the sake of standing for his ideals, honesty and beliefs,” the former Chief Minister said.