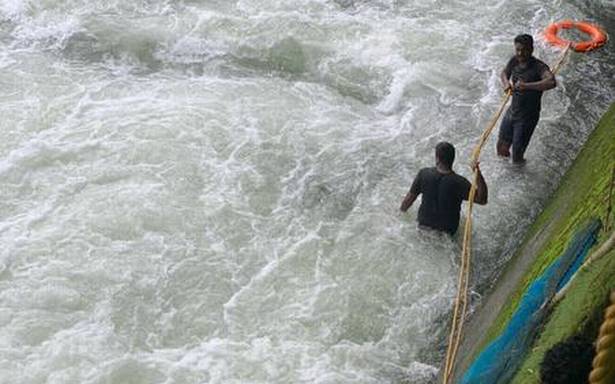 ‘Team Nanmakkoottam,’ a 60-member collective of youth, has been part of many rescue missions

The other day, Kottayam watched in shock as the news of a senior government official, who had jumped into the Manimala river, being swept away by the strong currents, broke out.

Launching a search operation in the water body, which has been in spate, was not easy and it took the authorities extra planning and hard work before finding the body, which had remained stuck to a metal rod underneath before floating on to the water.

The operation, which lasted over two days, also brought to focus the efforts of ‘Team Nanmakkoottam’ – a volunteer group of rescuers who braved the deep, murky waters to search the river body for hours on end. The 60-member collective of youths, based in Erattupetta, has been part of many a search and rescue missions in and around the region for about four years now.

“There are about 20 expert swimmers and divers in the group, all of whom have been actively into the rescue and search missions since the mega floods of 2018,” said Fazil Vellooparambil, secretary of the collective.

The team members, according to him, undergo training from experts including the Fire and Rescue Services personnel every six months and operate with a couple of rope sets and an unmechanised boat.

Operating primarily as a support team to the Police and the Fire and Rescue Service departments, it has conducted about 48 search operations and could also save a handful of lives.

The collective was founded by 38-year-old E.M. Afsal, an expert swimmer who lives on the banks of the Meenachil river near Erattupetta. Having been part of several rescue missions in the water body from a young age, Mr. Afsal decided to form the collective about 10 years ago with a mission to save lives.

Besides accidents in rivers, they also rush to support victims of road accidents as well. In times of the pandemic, the group also serves the public by operating ambulances and providing treatment assistance to COVID-19 patients.

The team, which offers its services to the public completely free, primarily depends on the membership and registration fee to support its operations.

“The movement of men and gears to accident locations definitely involve some cost. On most occasions, we share these between ourselves and in other occasions, people who call for the service contribute towards meeting such costs,” added Mr. Vellooparambil.

Taking note of the rising demand for their service in the region of late, the collective now plans to launch a full-fledged scuba diving team , besides floating a team of women rescuers.