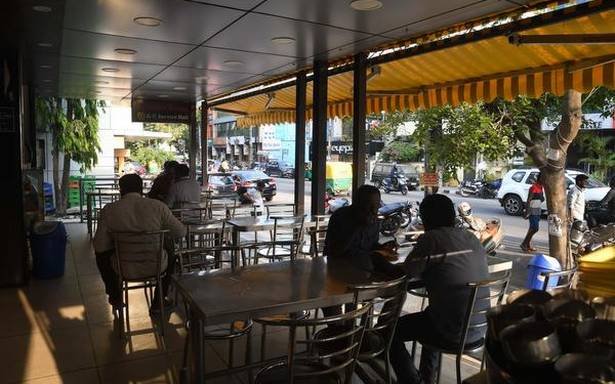 They want relaxation of curfew timings and permission for food delivery during the curfew, among other things

Representatives of the Karnataka Regional Hotels and Restaurants’ Federation and the Bruhat Bangalore Hotels’ Association (BBHA) met Minister for Health K. Sudhakar on Monday seeking relaxation of curfew timings and allowing food delivery during the curfew, among other things.

Stating that the meeting was partially successful, federation president Chandrashekhara Hebbar told The Hindu that while the Minister refused to relax the curfew timings, he did understand the need for allowing food delivery. He reportedly informed the representatives of discussing the issue with the Chief Secretary soon.

On Saturday, the BBHA and the National Restaurant Association of India (NRAI), together representing thousands of businesses in the food service sector of the hospitality industry, had submitted a memorandum to Chief Minister B.S. Yediyurappa seeking a change in commencement of curfew from 10 p.m. to 11 p.m. They had also sought permission for food delivery till midnight.

Mr. Hebbar said that hoteliers also raised the issue of closure of establishments which were not following COVID-19 appropriate behaviour (CAB) by local authorities. Dr. Sudhakar reportedly said that action was being initiated against violators to ensure that everyone takes CAB seriously.

The associations have also been seeking coverage of all employees of the food service sector in the vaccination drive. “Less than 2% of employees are aged above 45 years. The Minister said the rules and regulations for vaccinations are set by the Centre and implemented by the State government,” he said and added that Dr. Sudhakar promised to raise this issue during the next meeting with the Prime Minister.