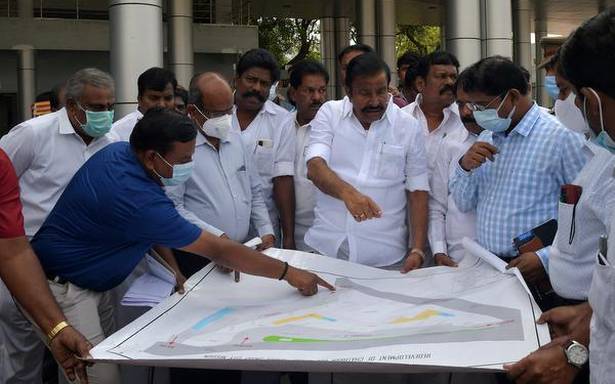 Chief Minister M.K. Stalin would inaugurate the Chathiram Bus Stand, refurbished at a cost of ₹ 17.34 crore with 30 bays, on Thursday and lay the foundation stone for the new integrated bus terminus at Panchapur in the city.

A park lot to accommodate about 350 two-wheelers has been created at the bus stand. It has facilities for the passengers to wait till the arrival of buses, luggage safety room, a feeding room for children, toilets for men and women and a food court. A total of 54 shops have been constructed. All works have been completed and it was ready for public use, Minister for Municipal Administration K.N. Nehru said here on Saturday after inspecting the bus stand along with Collector S.Sivarasu.

A wholesale market for vegetables and fruits, similar to the Koyambedu market in Chennai, would come up at Panchapur and ₹ 400 crore would be allotted in the first phase. A Government Order on allotting the sum would be issued shortly to enable foundation stone laying ceremony. Preparation of Detailed Project Report (DPR) for the new terminus was on. A clear picture on all infrastructure to be established at Panchapur would emerge once it is ready.

Later, the minister inspected the arrangements being made at CARE college campus where a function would be held when the Chief Minister will distribute welfare assistance also.