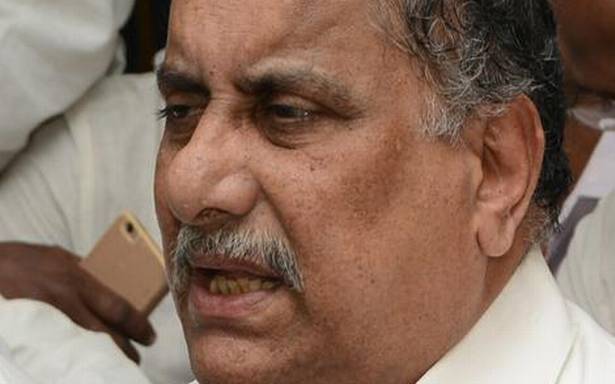 In a two-page letter, the Kapu leader has alleged how Mr. Babu subjected him to psychological and physical torture by police during the Kapu movement.

Kapu leader Mudragada Padmanabham has appealed to TDP Chief N. Chandrababu Naidu to introspect the psychological and physical torture subjected to him by the police during the latter’s regime.

Dismayed at Mr. Chandrababu’s campaign on the allegations over his wife’s personal life, Mr. Padmanabham has alleged that Mr. Chandrababu Naidu had resorted to physical and psychological torture to him and his family with the police support during the Kapu movement (2017).

“We both entered the Assembly in 1978. I have worked under TDP Founder N. T. Rama Rao and you for many years. However, I never attempted to backstab you during our political journey”, said Mr. Mudragada in his two-page letter shot to Mr. Naidu.

Mr. Padmanabham has alleged that Mr. Naidu and his son Mr. Lokesh have hushed up his movement which was launched for the Backward Caste status for the Kapu community and arrested him for 14 days, subjecting himself and his family to the torture. In 2017, Mr. Padmanabham was not permitted to take out the padayatra as part of the Kapu movement.

“It was my firm belief that you would also meet a similar fate, in which you would have to repent for your previous acts that aimed at subjecting to torture to myself and my family members”, said Mr. Padmanabham.