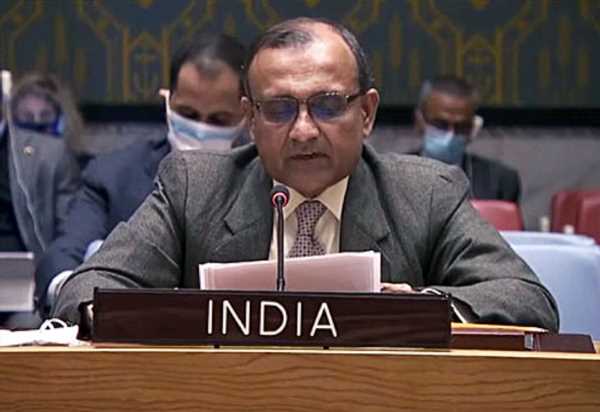 India voiced concern over the ‘urgent and pressing’ humanitarian situation developing in Ukraine and told the UN Security Council that apart from evacuating its own citizens, New Delhi stands ready to help those from neighbouring and developing countries stranded in Ukraine and in need of assistance.

“There is an urgent and pressing humanitarian situation developing in Ukraine. In such times of conflict, India attaches the highest priority to safety and well-being of civilians, in particular women, children and elderly. We are of the view that core principles of humanitarian assistance should be fully honoured,” India’s permanent representative to the UN ambassador T S Tirumurti said at the Security Council meeting Monday on the humanitarian situation in Ukraine.

Tirumurti voiced deep concern for the safety and security of thousands of Indian citizens, including students, stranded in Ukraine.

“Our evacuation efforts have been adversely impacted by the developments on ground at the border crossings,” Tirumurti said.

Underlining that the safety of Indian nationals is of ‘paramount importance’ to the Indian government, Tirumurti told the council that senior ministers from the government of India are being deployed as special envoys to Ukraine’s neighbouring countries.

“We thank them for their cooperation at this difficult time. We stand ready to help those from neighbours and developing countries who are also stranded in Ukraine and may seek assistance,” he said.

India has decided to send four senior ministers as the prime minister’s special envoys to Ukraine’s neighbouring countries to oversee the evacuation of Indians.

Ministry of external affairs spokesperson Arindam Bagchi said in New Delhi that minister for housing and urban affairs and Minister for Petroleum and Natural Gas Hardeep Singh Puri will go to Hungary, Minister for Civil Aviation Jyotiraditya Scindia will oversee the evacuation process in Romania and Moldova, Minister of Law and Justice Kiren Rijiju will travel to Slovakia and Minister of State for Road Transport and  Highways and Civil Aviation General (retd) V K Singh is leaving for Poland.

Tirumurti said that taking into account the humanitarian requirements in Ukraine, the Indian government has also decided to provide urgent relief supplies, including medicines and these are expected to be dispatched Tuesday.

India on Monday decided to send relief supplies to Ukraine to deal with the humanitarian situation along its bordering areas arising out of tens of thousands of people attempting to flee the Russian invasion.

Tirumurti told the Council that India remains deeply concerned at the unfolding developments in Ukraine, where the situation continues to deteriorate.

“Our considered call for immediate cessation of violence and an end to all hostilities is an urgent imperative,” Tirumurti said, reiterating that there is no other option but to return to the path of diplomacy and dialogue, as the only way ahead.

He underlined that Modi has advocated strongly for the immediate cessation of violence and end to all hostilities in his recent conversations with the Russian and Ukrainian leadership.

“We welcome their commencement of direct talks. We reiterate our conviction that differences can only be bridged through sustained dialogue and diplomacy.”

In his conversation with Ukrainian President Volodymyr Zelenskyy, Modi reiterated his call for an immediate cessation of violence and a return to dialogue, and expressed New Delhi’s willingness to contribute in any way towards peace efforts.

In the telephonic call with Russian President Vladimir Putin, Modi reiterated his long-standing conviction that the differences between Russia and the NATO group can only be resolved through honest and sincere dialogue.

He appealed for an immediate cessation of violence, and called for concerted efforts from all sides to return to the path of diplomatic negotiations and dialogue.

India also underlined that all member states have agreed on the principles in UN Charter, international law and on the respect for the sovereignty and territorial integrity of states.

Tirumurti said India notes the appointment by UN Secretary General Antonio Guterres of Amin Awad of Sudan as United Nations Crisis Coordinator for Ukraine, to lead the coordination of all UN efforts, including the humanitarian response, on both sides of the contact line.

“We support and welcome the UN’s efforts in this direction.”

France requested the meeting of the 15-nation Security Council on the humanitarian situation in Ukraine.

The Council meeting was running parallel to a rare emergency special session of the 193-member UN General Assembly on Russia’s aggression against Ukraine.