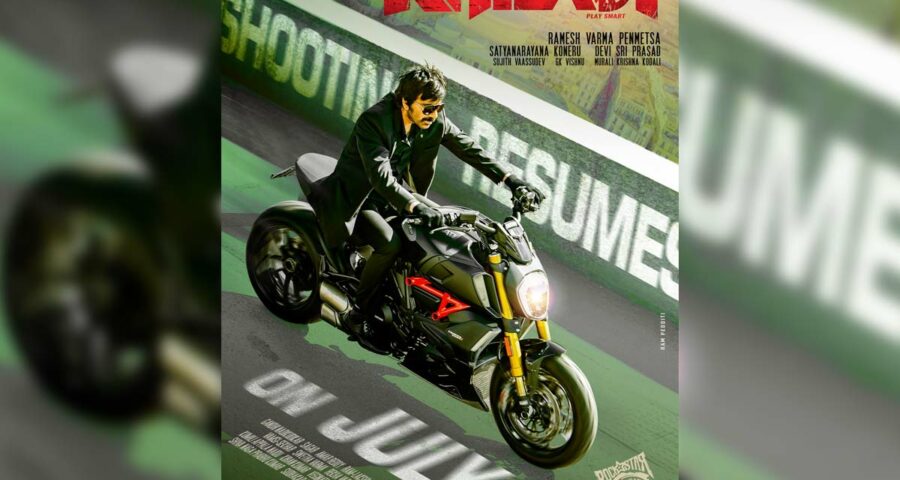 Mass Maharaja Ravi Teja‘s Khiladi was supposed to release in theatres on 28th May. However, due to the Covid-19 pandemic and the lockdown, the film’s release was postponed to a later date.  In this film Ravi Teja is playing the dual role. Today morning the makers of Khiladi took to twitter to share an update by releasing a new poster. They revealed that the shoot of Ravi Teja starrer Khiladi will resume on 26th July. Coming on the poster, Ravi Teja is seen riding an expensive bike.

Few days ago, a video from the sets of Khiladi went viral on the social media, where Ravi Teja was seen performing a breath-taking stunt on a bike. He was seen chasing someone on his two-wheeler and pulling off a crazy stung.

The action drama Khiladi has Meenakshi Chaudhary and Dimple Hayathi in the female lead roles. It is helmed by Ramesh Varma and is bankrolled by Satyanarayana Koneru.

During the lockdown, it was rumoured that  Ravi Teja starrer Khiladi  will hit OTT. However, the film’s team clarified that it’s meant for a theatrical release post  Coronavirus pandemic. The makers also stated that they have not compromised on anything while the shooting, despite the current condition.