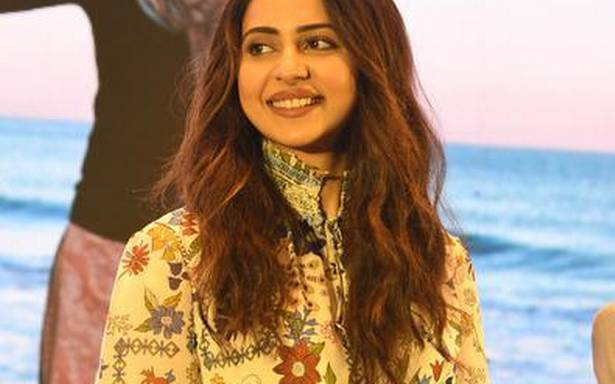 The 30-year-old Tollywood actor, who made her debut in Bollywood, was summoned by the ED in connection with a money laundering case involving a high-end drug racket that was busted in the city in 2017. She is likely to be grilled by the investigators till evening.

Ms. Singh reportedly made a special request to the central agency and appeared three days before her scheduled summons due to her busy shooting schedule. While she was asked to come at 10.30 a.m., the actor reached the office an hour before, to avoid ‘media chaos’, but was later surprised to see the media personnel waiting for her at the ED office.

The Sardar Ka Grandson actor will be questioned on her alleged links with the drug racket and following case registered under the Prevention of Money Laundering Act.

She was asked to produce her bank statements to question the alleged suspicious transaction. In September last, Ms. Singh was questioned by the Narcotics Control Bureau, Mumbai, in an alleged drugs nexus in Bollywood, during which she was questioned about a reference to a word ‘doob’ that had appeared in her WhatsApp conversations with actor Rhea Chakraborty.

Meanwhile, the ED has summoned more than 10 celebrities of Tollywood, including director Puri Jagannadh and actor Rana Daggubati, in a case related to the smuggling of ‘Class A’ narcotic substances, including LSD and MDMA.

After the racket was busted in July 2017, which further followed the arrest of several people, including an American, a South African and a Netherlands National, several Tollywood celebrities were questioned by the Telangana’s Prohibition and Excise Department sleuths.