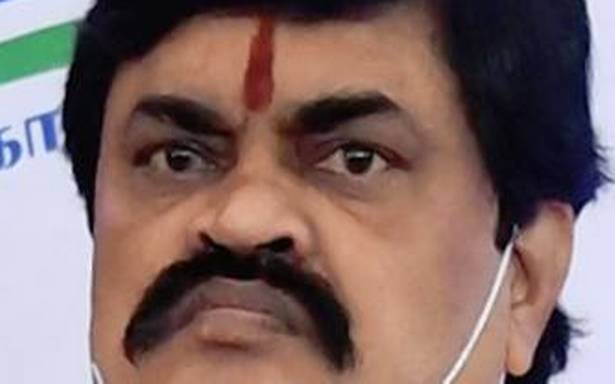 The former minister was held in connection with cheating cases.

Former State Minister, K.T. Rajenthra Bhalaji, who was arrested from Karnataka on Wednesday in connection with cheating cases, has been remanded in judicial custody till January 20.

District Crime Branch had registered two cases against the former Minister for Milk and Dairy Development on December 15 last year on the charge of cheating several persons by taking money on the promise of getting them jobs in Aavin and other Government departments.

After his anticipatory bail petition was rejected by Madurai Bench of Madras High Court on December 17, Mr. Bhalaji went absconding.Virudhunagar district Superintendent of Police, M. Manohar, formed special teams to nab him and also issued Lookout Circular to prevent him from leaving the country.

The police arrested him in Karnataka after a hot chase on Wednesday.

Mr. Bhalaji was brought to Virudhunagar at around 1.30 a.m. on Thursday and was grilled by senior police officers at the District Police Office.

He was taken to district combined court complex at Srivilliputtur after being medical examination.

Police sources said that Mr. Bhalaji would be lodged in Madurai Central Prison.