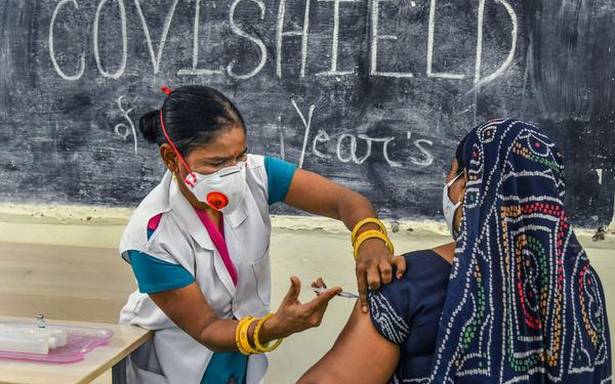 Vaccination to be made compulsory from February 1

With 21 cases of Omicron reported on a single day, the Rajasthan government on Saturday decided to step up the vigil and take stringent measures to control the spread of infection. A diagnostic report from Pune’s National Institute of Virology confirmed the new cases, taking the tally in the State to 43.

The State government decided to make the COVID-19 vaccination compulsory for entering the public places and getting the benefits of various schemes from February 1 and strictly implement the curfew from 11 p.m. to 5 p.m. New guidelines will be notified shortly.

Chief Minister Ashok Gehlot said at a COVID review meeting here that legal action would be taken against those not wearing face masks and not following appropriate behaviour from the New Year’s first week. Besides, a list of those not fully vaccinated will be prepared and action initiated for complete vaccination in all districts.

The 21 new cases included five persons who had returned from abroad, while three were those who came in contract with the travellers and three others were found through contact tracing of the patients who were earlier found positive. All of them were isolated in the dedicated Omicron wards.

While 11 of them were from Jaipur, six were from Ajmer, three from Udaipur and one from Maharashtra. Medical & Health Secretary Vaibhav Galriya said 21 of them had recovered and were discharged from the health facilities after they tested negative.

Mr. Gehlot also reiterated his demand that the Centre give booster doses of COVID-19 vaccine to the people above 60 years and the frontline health workers and allow vaccination for children. “The third and fourth doses of vaccines are being administered in several countries. The Central government should allow booster dose without delay,” he said.

He said it was necessary to complete 100% vaccination of eligible persons to protect the State’s population against a third wave of infection. He directed the health officials to increase the number of RT-PCR tests.